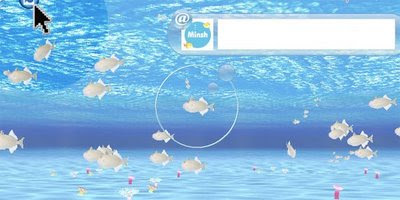 Minsh, a start-up by PhD students at the Federal Institute of Technology in Lausanne, is a 3D visualisation of what Twitter users are writing about. It consists of an underwater navigable world where each fish represents a Twitter user.

The idea behind the virtual world is that the social behavior of fish will represent what people are talking about online. In the Minsh Twittersphere, people writing about a given subject will find themselves swimming in the same school. When a person updates their Twitter status, the fish swims away to join people with similar thoughts on their minds. Currently still in a very early Alpha phase, the website promises the Alpha 2 will be released on July 13th 2009, with more features and just 1,000 invitations.

Neat. looks like a soothing environment. So what is the benefit of this type of set up? If someone wants to talk in depth about something they are tweeting about, wouldnt they just go to a traditional online forum on the topic to see everyone's posts? but i guess it's live, so its like talking to everyone on msn at once, and its for purposes of social networking too?