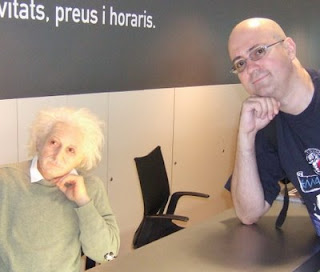 I've got some exciting news for those interested in cosmology, SETI and transhumanism: Milan M. Cirkovic will be guest blogging on Sentient Developments next week starting on May 18. It's a great honor to have him contribute to the blog. His views on SETI, the Fermi Paradox and the ultimate manifestation of intelligent life have significantly influenced my own.

His primary research interests are in the fields of astrophysical cosmology (baryonic dark matter, star formation, future of the universe), astrobiology (anthropic principles, SETI studies, catastrophic episodes in the history of life), as well as philosophy of science (risk analysis, observation selection effects, epistemology). A unifying theme in these fields is the nature of physical time, the relationship of time and complexity, and various aspects of entropy-increasing processes taking place throughout the universe.

Milan recently co-edited the anthology on Global Catastrophic Risks (Oxford University Press, 2008) and translated several books, including titles by Richard P. Feynman and Sir Roger Penrose. In recent years, his research has been published in Astronomy & Astrophysics, Monthly Notices of the Royal Astronomical Society, Physics Letters A, Astrobiology, New Astronomy, Origin of Life and Evolution of the Biosphere, Foundations of Physics, Philosophical Quarterly and other major journals.

Look for Milan to blog from May 18 to May 22. While you wait, check out his excellent paper, "On the Importance of SETI for Transhumanism."
Posted by George at 5/14/2009