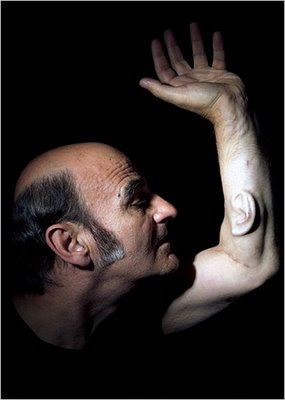 The New York Times has published an article about one of my favorite people on the planet, the Australian performance artist Stelarc. His art focuses heavily on futurism and extending the capabilities of the human body, and as such, most of his pieces are centered around his concept that the human body is obsolete. From the article:

The body, however, has its ways of fighting back against the 5-year, or 500-year plans of its owners. Geneticists report that our own genes are still evolving, to what end, no one can guess. No supercomputer can yet predict from simply reading a sequence of A’s, C’s, T’s and G’s that make up a genetic code what creature will emerge.

The progression to postnatural history may be a painful birth if the experience of Stelarc, 62, who splits his time between Brunel University in West London and the University of Western Sydney in Australia, is any example. The body, he says, is obsolete and needs to map its “post-evolutionary strategies.”

To that end, Stelarc has outfitted himself at times with an extra hand (nonsurgically), swallowed a camera that would explore the sculpture of his stomach and hung himself in the air on hooks. For a show called “Fractal Flesh,” he wired half his body, in Luxembourg, up to muscle stimulation equipment that could be controlled by computers in Paris, Helsinki and Amsterdam. The result, he told an interviewer later, “was a split body experience.”

The ear on his arm, he said, is a work in progress that has required a couple of surgeries so far. It took him 12 years to find the doctors and the financing, which was provided by the Discovery Channel as part of a series in experimental surgery, to do the work.

As an aside, I had the great pleasure of meeting Stelarc when he keynoted at TransVision 2004. Unlike the anti-social Steve Mann (who also gave a keynote presentation), he stayed and mingled with the conference attendees for the entire weekend -- he's a very warm and approachable guy. He was even in attendance for my talk on working the conscious canvas, which was a great honour (yes, I'm a fanboy).
Posted by George at 4/15/2009

Lassoing Steve Mann into a conversation while I was pretty buzzed has got to be one of the funnier things I've done. It worked out alright, we played the hydrophone together.