Military robots will soon be able to fire on their own 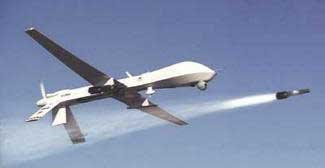 The U.S. Defense Department is reportedly looking to develop autonomous armed robots that will eventually be able to find and destroy targets on their own. Instead of being controlled remotely, unmanned drones will have on-board computer programs that can decide whether they should fire their weapons.

"The trend is clear: Warfare will continue and autonomous robots will ultimately be deployed in its conduct," writes Ronald Arkin, a robotics expert at the Georgia Institute of Technology in Atlanta. "The pressure of an increasing battlefield tempo is forcing autonomy further and further toward the point of robots making that final, lethal decision," he predicted. "The time available to make the decision to shoot or not to shoot is becoming too short for remote humans to make intelligent informed decisions."

According to John Pike, an an expert on defense and intelligence matters, autonomous armed robotic systems probably will be operating by 2020.

But many fear that these robots will be unable to distinguish between legitimate targets and civilians in a war zone.

"We are sleepwalking into a brave new world where robots decide who, where and when to kill," said Noel Sharkey, an expert on robotics and artificial intelligence at the University of Sheffield, England.

One thing I have not see mentioned about self firing weapons is that we already use them in the form of landmines.
At least the flying form of the landmine lasts only as long as the fuel or the batteries.

"But many fear that these robots will be unable to distinguish between legitimate targets and civilians in a war zone."

No shit, Sherlock. This has already happened repeatedly in Afghanistan. Of course, humans also do this based on faulty intelligence, misinterpretation of cues -- or culturally wired dislike.