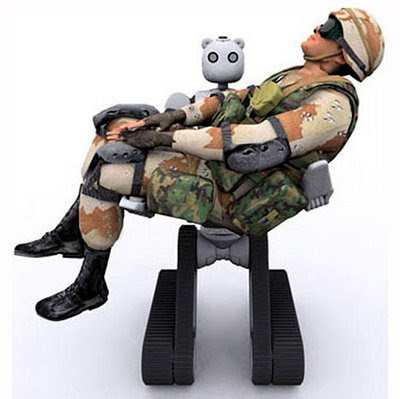 The Battlefield Extraction-Assist Robot (BEAR) has hydraulic arms that can support injured soldiers weighing up to 400 lbs -- more than most troopers in full gear -- and a system of wheels, tracks and joints that enable it to maneuver in all sorts of positions. The unit is being developed by VECNA Technologies primarily for military search-and-rescue missions. 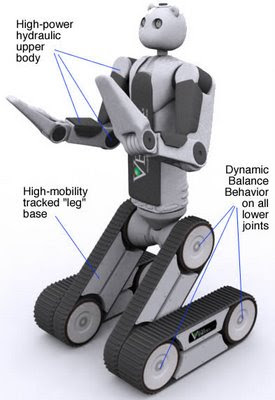 The robot's legs also have wheels and tracks built into them that the robot can switch to by kneeling. Its head is designed to look like that of a teddy bear, to provide reassurance to the wounded soldier it is transporting.

It can balance on its back wheels to climb up a steep hill or roll over rough terrain while staying low to the ground. BEAR currently requires a human to drive it via remote control, but a more autonomous version is in the works. 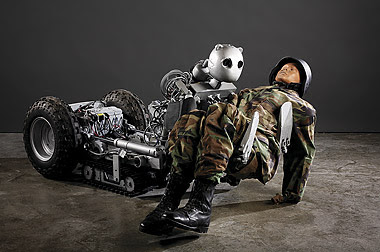 I guess I's assumed this project had been quietly abandoned. (At least the disquieting bear head.)

Perfect. When he's down, I can't get a finishing shot, but with the robot picking him up, I can get a clean shot of the head.

That doesn't sound sinister at all.