Should we shout at the cosmos? 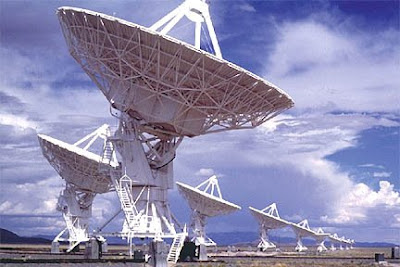 I am assuming that some of you have gone slumming, and read my piece about METI -- the recent effort by some to transform the Search for ExtraTerrestrial Intelligence into a prolonged and vigorous effort to actively send MESSAGES to such entities.

If you haven't read it, that's okay. I can wait while you read it here.

(Cue elevator muzak. "The girl from Impanima." While the rest of us shuffle our feet and avoid staring at each other. Maybe comment on the weather...)

Ah, good, you're back. So, do you think that we little Earthlings ought to start hollering, trying to draw attention from any advanced civilizations, out there? Really? We are presumably the youngest and most ignorant race in all the galaxy, like an infant, stumbling around in a jungle we do not understand, with no knowledge at all about the situation out there. And yet, it is behooved on US to do the shouting?

As they put it in "Bored of the Rings..." Yoohoo? Beasties? Come and eat us!

Do I really expect slathering hordes of Kardassian invaders? Um, no. In fact, in all of this controversy, I have never, ever expressed fear of alien attack or invasion. Ever. What bugs me is not so much the likelihood of attack, which I deem to be fairly low - but not-zero.

No, it is the profound and cult-like arrogance that has arisen, among those within the extremely narrow, self-referential and inbred SETI community, who no longer even seem to be able to notice the unwarranted assumptions that they make. Indeed, in order never to have those assumptions questioned, they go to great lengths to isolate themselves from colleagues in other branches of science. It is that refusal to even discuss these matters, at wide-open scientific conferences, where their catechisms might be scrutinized by biologists, geologists, technologists and others, that demonstrates how far down the road of cult fanaticism they have gone.

It is a pity, because SETI is a noble undertaking. An expression of the curiosity and expansiveness and eagerness that typifies humanity, at its best. It deserves better than it's getting. It deserves adults. It deserves science.

Next, George wants to talk about...

"Will a transparent society help humanity survive extinction risks?" We live in an age of increasing privacy concerns and along with it the rise of defeatism and cynicism. But a number of thinkers have turned these anxieties on their head by suggesting that a society without privacy is a safe society. David Brin calls this the transparent society, and he believes it’s this kind of openness that will help human civilization get through its most difficult phase yet – and it might just get us past a series of extinction risks and on through to the Singularity."

I never would have predicted, as a youth, that I would grow up to be "Mr. Transparency." Or that so many people would misinterpret my stance as "anti-privacy." (Actually, I love privacy! I just want citizens to know enough so that THEY can defend their freedom and privacy, instead of counting on unreliable elites to do it for them.)

Another immense topic, that I cover at book-length in The Transparent Society: Will Technology Make Us Choose Between Privacy and Freedom? A topic containing vast subtleties and twists and surprises... and shame on you, if you react with just a pat, pablum answer to the quandary, instead of exploring and asking questions, the way a serious citizen would!

A number of my transparency-related articles can be viewed on my web site. For those with little time: A little allegory from The Transparent Society. Of intermediate length: my controversial Salon Magazine privacy article:

One of my ongoing themes has been a 21st Century struggle to empower citizens, after the 20th Century's relentless trend toward the "professionalization of everything." But this may be about to change. For example, an overlooked aspect of the 9/11 tragedy was that citizens themselves were most effective in our civilization's defense, reacting with resiliency and initiative while armed with new technologies (more here).

Think. Take on and embrace complexity. dogmas are for slaves and conquistadors.
Posted by David Brin at 3/26/2009

I think the decision on METI is really hit and miss. It could be a good thing to do and it could be bad, who knows? How will we know what is the best thing to do?

Perhaps the only way to survive in the universe is to ask for help?

I agree with you David, on the acts of Seti and the more common sense approach that should be taken. The only thing I can offer is a tale on fighting techniques I learned in a Ninjitsu class: The Dragon and the Tiger. The Dragon makes himself a target, blustering across the skies, tooting his horn and tossing out dares to the wind, while the Tiger lies in wait patiently. The outcome is predictably obvious. So are we Tigers or Dragons, blasting arrogantly to the skies, offending and looking dumb, or are we ready to observe and learn? What of the Other out there? Better for us to assume a Tiger lies in wait in the skies of the Dragon, than to toot and smell like a rotten egg. Arrogance blows you off your perch every time.