When 8 is more than enough: It's time for some meaningful regulation 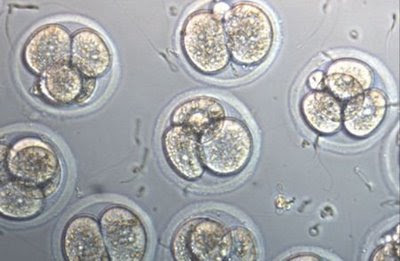 Like a lot of people last week, I was shocked to find out that Nadya Suleman, the mother of the octuplets born last week in Los Angeles, already has 6 children -- all between the ages of 2 and 7.

And that she has a psychological condition which compels her to keep wanting to have more babies.

Now, I'm a huge advocate of reproductive freedoms and equal access to repro-tech, but something clearly failed to happen here. In this case, the fertility clinic that performed the procedure failed to exercise both restraint and common sense. They also showed a complete disregard for guidelines -- a strong indication that, while regulation exists for repro-tech procedures, it's not being enforced strongly enough. This needs to change.

First off, it sounds like Suleman should have failed the screening test. Prospective parents must undergo an evaluation of their psychological and sociological circumstances before qualifying for IVF treatment. According to R. Dale McClure, president of the American Society for Reproductive Medicine, an investigation had started into the case, but that: "Concerns for confidentiality preclude us from making any additional comments at this time."

Would it be unfair of me to interpret this as an acknowledgment that their investigation failed to raise the necessary warning flags? Or that they lacked the resolve to act on them?

Again, I don't mean to bemoan the desire of some parents to have large families, but it appears that there were extenuating circumstances in this case that would should have precluded the mother from having more babies, namely her questionable mental state and motives for wanting to have more children.

This is more than just an issue of procreative liberty -- it's also a quality of life issue for those children being introduced into the world.

Given that Suleman passed the screening test, it would appear that the assessment criteria and investigative processes should be overhauled

Second, the fertility clinic implanted (at least) 8 viable embryos. Most (responsible) clinics will only implant a pair of embryos to reduce risk (both to mother and children). And this is made all the more troubling considering that Suleman has already delivered twins; the fertility clinic knew she had a predisposition for multiple births, yet they didn't adjust their treatment accordingly.

By implanting 8 embryos in a mother predisposed to multiple births, they put her health at risk and they significantly increased the likelihood of her introducing a multiplicity of babies into a family that was already over-extended.

According to Michael Tucker of the Georgia Reproductive Clinic, Atlanta, clinics are policed by the American Society for Reproductive Medicine, which frowns upon implanting more than two or three embryos at a time. "It is remarkable," says Tucker, "that any practitioner would undertake such a practice."

Well, it would only have been remarkable if the ASRM had the teeth to enforce their policies. If the Suleman case is any indication, their reach and influence is insufficient.

Looking at this case one gets the feeling that some fertility clinics look upon their patients as nothing more than customers. Given the nature of their work, however, this attitude will simply not do.

A lassez-faire approach to repro-tech won't work to protect the interests of those hoping to use these technologies and to protect those lives that are created as a result. I agree that regulation should be very liberal and accommodating to a diverse set of interests, but complete de-regulation would be both dangerous and facile.

But establishing regulations and guidelines is one thing, enforcing it is quite another.

In some cases, this one included, it would be perfectly reasonable for the state to intervene and deny access, or at the very least compel clinics to follow a strict set of guidelines to prevent this sort of thing from happening. It's time to empower groups like the ASRM -- particularly now as new reproductive technologies are emerging quickly. This way, fertility clinics will be compelled to follow the rules and be held accountable for their actions.

It's clear that this has to happen. Clinics won't regulate themselves.

But why should we have expected them to? They're not the ones who now have to raise these children.
Posted by George at 2/01/2009

Would you advocate limiting the number of children one could have without technological help? If not, aren't you being influenced by the same sort of social conditioning you've pointed out in others?

In a liberal society, where we're free from eugenics, we can't really prevent a family from having too many children. But the state can certainly take away these children from families who are incapable of raising them.

In this particular case, the mother did not intend on having 8 babies -- that was a consequence of the fertility treatment and the manner in which it was done. Only time will tell if she, with the support of others, are able to raise these children in an adequate environment.

This is a bizarre case. In Canada, I don't know if its regulated, but most IVF clinics will only transfer a maximum of three. The primary reason is to prevent the medical complications of multiple pregnancies, but studies have shown that transferring more than three does not significantly raise the success rate to warrant the risk.

I absolutely agree that, if it can be shown that this woman is not capably raising them then they should be taken away. That we may decide ahead of time that she won't does smack at least a little bit of eugenics, though.

From what I've read you're mistaken about the mothers intentions. Apparently the embryos where left over from her previous fertility treatments and she was unwilling to let them be destroyed. Given that, the doctor should have known she would not have terminated excess implanted embryos and should never have used so many at once. Regulation around that is certainly reasonable.

I somewhat suspect that he was gambling that if he did them all at once most wouldn't implant and she'd end up with less than 10 children.

I think rules should apply across the board, whether children come from regular conception, fertility treatments of any kind, or adoption. Adoptive parents have to go through the wringer to prove they are "worthy". I suspect that if the same criteria were applied to the other two categories of prospective parents, we might solve both child abuse and overpopulation in one fell swoop.