Improve your performance with energy drinks 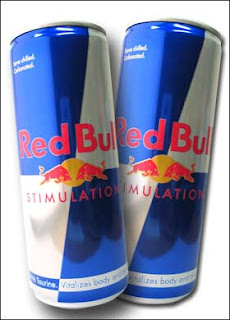 I've started to do something I once swore I'd never do: I'm hittin' the energy drinks.

I realize it's not the healthiest habit in the world, but this stuff works. And it's solved my afternoon drowsiness problem -- a time of day when I desperately need to be sharp and alert.

You've likely seen these products on store shelves and advertised as sports or health drinks. Popular brands include Red Bull, Rockstar, Monster and Amp energy drinks. They typically come in 250ml and 500ml varieties, but you can also get them as shots, such as the 5 Hour Energy Drink.

I'm actually quite amazed at how well these drinks work. As someone who routinely looks for an enhancement edge, I have to admit that energy drinks deliver. The beneficial effects that these beverages induce aren't just placebo; a growing body of clinical evidence supports the claim that energy drinks have a positive impact on both physiological and psychological performance.

So, if you're looking to improve your alertness and mental acuity when you need it, you may want to consider energy drinks. Just make sure you don't over do it.

Energy drinks, which are typically laden with caffeine, taurine, ginseng and guarana, can improve mental and cognitive performance as well as increase subjective alertness. I can certainly vouch for these effects; after one drink I almost immediately feel the drowsiness dissipate. My mood is given a bit of a lift and I can re-focus on the task at hand.

Clearly, the benefits of these drinks can be applied across many different areas. For those who spend a lot of time behind the wheel, for example, these beverages can improve driving performance in the form of reduced lane drifting and increased reaction times.

Physically, they can increase upper body muscle endurance, which, in addition to an apparent 'energy boost' (which I think is actually just subjective clarity and mild euphoria) has contributed to its prevalent use in gym culture.

The effects of taurine in particular is fascinating. It's an organic acid that can penetrate the blood-brain barrier and is responsible for a wide array of physiological phenomena including inhibitory neurotransmission, membrane stabilization and the prevention of oxidative stress induced by exercise. Taurine also acts as an antioxidant and protects against toxicity of various substances (such as lead and cadmium).

On the negative side, excess consumption can induce mild to moderate euphoria (which may or may not be a bad thing) that is primarily caused by the stimulant properties of caffeine and sugar. Energy drinks can also cause agitation, anxiety, irritability and insomnia. Energy drinks have been linked with reports of nausea, abnormal heart rhythms and emergency room visits.

There have even been deaths attributed to energy drinks, but these cases have typically involved severe over-use and are complicated by other factors.

I have been very strict about my usage. I limit myself to one 250ml sugar free drink per day. It gets me through the afternoon and it has a positive impact on my productivity.

And I'm not alone. It has become very common for students to consume energy drinks to increase their concentration as they study throughout the night, leading some to suggest that energy drinks are the coffee of a new generation.

Usage is through the roof. According to a 2008 report by Agriculture and Agri-Food Canada, 1.5 billion cans of Red Bull were sold in the United States in 2004. Consumption in Canada is comparable and it is a growing trend for 18-to 24-year-olds.

And this market segment is broadening as younger children are beginning to consume these drinks before engaging in physical activity (it doesn't help that the manufacturers are targeting young people, including the Cocaine Energy Drink). Unfortunately, this isn't such a good idea; energy drinks don't hydrate the body efficiently because they have too much sugar, while the caffeine doesn't necessarily improve physical performance. In fact, high quantities can increase the risks of fatigue and dehydration.

My advice is to minimize usage and only use it for specific applications. And don't get into the habit of mixing it with alcohol (or drugs) as the combined effects will work over-time to dehydrate your body. Worse, you'll likely end up drinking more because you feel so good and alert.

Like any good thing in life, moderation is the key. Avoid energy drinks altogether if you can. For me, it's solved a problem and I haven't noticed any detrimental side effects. I'll continue to consume these drinks until I feel they're no longer serving a purpose or they start to impact negatively on my health.

And in the meantime I'll enjoy these drinks and the benefits that they bring.
Posted by George at 2/10/2009

I highly recommend looking into alternative options, as there's certainly no shortage of cognitive enhancing substances around.

Piracetam and the related Aniracetam have been fairly beneficial for me, particularly for the mid afternoon lull that you mention. Most importantly (for me at least) they're not as harsh as highly caffeinated drinks typically seem to be.

Strangely, I can drink espresso virtually all day but one can of "Rock Star" makes me feel like I'm having a particularly grueling out-of-body experience. Make of that what you will.

Warning: from personal experience taurine = instant migraine, and I do mean instant.

I find it weird that people in todays society that have sedentary lifestyles find they are constantly tired and they assume that a simple energy drink will be the answer. When in fact, they are putting a band-aid on the real problem.

But based on your CrossFit blog, I can see why you would be tired in the afternoon. I get tired at around 4pm after I workout at noon as well. But I am loyal to my afternoon Tim Hortons coffee. No energy drink in the world can match one of those!

The most important statement of this post doesn't include any link to backing evidence.

I'd be interested in the clinical evidence that you're talking about.

Such an obvious "infomercial" _ give me an effing break.

@Dustin: Much of this article was researched in Wikipedia. The entry on energy drinks will provide the references you're looking for.

I would like you to commit to an update in 6 months. :)

Researched in wikipedia? Come on, George, you can do better than that.

@Anonymous And what is it exactly that you have against Wikipedia and the quality of the references? Or are you just trolling....

Do you drink coffee daily? I don't and I think that's why energy drinks "work" so well for me. The effect fades slowly if I drink them every day. Caffeine tolerance?

energy drinks is not the solution for you not to be sleepy. you are just abusing yourself take best multivitamins for both men and women everyday. so you will have a healthy way of living.