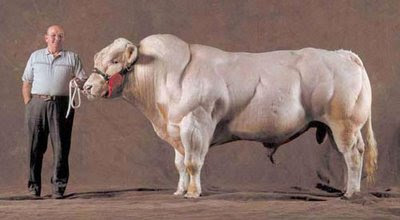 This fine specimen, known as the Belgian Blue, has experienced "double muscling" due to a gene that suppresses the production of myostatin, a protein that normally inhibits muscle growth after a certain point of development.

Scientists have already inhibited the myostatin gene in mice and are working on blocking the gene in humans in order to treat muscle wasting diseases such as muscular dystrophy. A pharmaceutical company called Acceleron is developing a myostatin inhibiting drug called ACE-031 that will mimic this effect in humans.

And I'm sure there are some athletes who can't wait to get their hands on it....

Last year, there was a story about a child born who naturally suppresses myostatin.

I for one welcome our new bovine overlords.

Also, the supercow thing strikes me as potentially highly unethical. Wouldn't all that muscle be painfully sensitive?

Athletes needs muscles that are strong, not big.

This is probably of more interest for body builders...

With cattle this size we can surely power our cars with Methane from their waste! Cattle feed-lots will soon be the "New" fuel wells!

super cow now what is next....

Isn't that a bull

Yes it is a cow, and the bred has been around for a long time.

Unfortunately the gene maked them prone to other disorders, and makes giving birth naturally for these cattle nearly impossible as the extra muscle makes an extra big calf and an extra narrow birth canal.

I want to know what it taste's like before I call it "super".