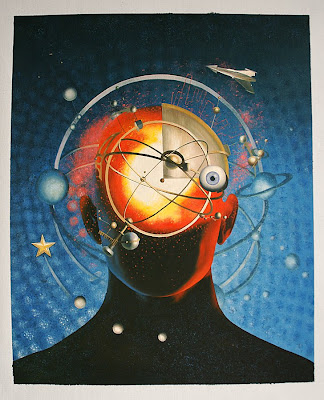 This month's New Scientist features a cover article about the theoretic possibility that our universe may be a giant hologram. This revelation isn't anything new, but there now appears to be potential evidence in favor of the suggestion.

For a number of months, team-members working on the GEO600, a device that measures gravity waves, were confused about some inexplicable noise that was plaguing the giant detector. Researcher Craig Hogan offered an explanation: the GEO600 has stumbled upon the fundamental limit of space-time - the point where space-time stops behaving like the smooth continuum Einstein described and instead dissolves into "grains," just as a newspaper photograph dissolves into dots as you zoom in.

"If the GEO600 result is what I suspect it is," says Hogan, "then we are all living in a giant cosmic hologram." The New Scientist article explains:

The holograms you find on credit cards and banknotes are etched on two-dimensional plastic films. When light bounces off them, it recreates the appearance of a 3D image. In the 1990s physicists Leonard Susskind and Nobel prizewinner Gerard 't Hooft suggested that the same principle might apply to the universe as a whole. Our everyday experience might itself be a holographic projection of physical processes that take place on a distant, 2D surface.

My favorite quote from the article comes from Hogan: "It looks like GEO600 is being buffeted by the microscopic quantum convulsions of space-time."

Okay, so you're a hologram. Carry on.