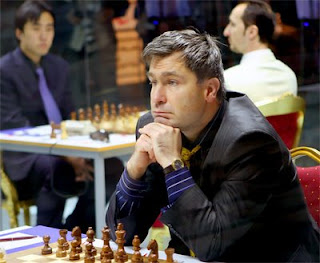 Grandmaster Vassily Ivanchuk, who is ranked third in the world, refused to agree to a urine sample for a drug test at the Chess Olympiad in Dresden and is now considered guilty of doping. He could face a 2-year ban:

Who knows what was going through Ivanchuk's head when, on Nov. 25 in Dresden, the last day of the Chess Olympiad, he lost to Gata Kamsky? What we do know, however, is that when the game against the American ended, a judge asked Ivanchuk to submit to a drug test. Instead, he stormed out of the room in the conference center, kicked a concrete pillar in the lobby, pounded a countertop in the cafeteria with his fists and then vanished into the coatroom. Throughout this performance, he was followed by a handful of officials.

No one could convince Ivanchuk to provide a small amount of urine for the test. And because refusal is treated as a positive test result, he is now considered guilty of doping and could be barred from professional chess for two years.

The incident in Dresden and the possibility of a professional ban for Ivanchuk has caused outrage in the chess world. The players, who fraternize with one another, say that accusing one of them of doping is an insult to their honor and intelligence. Letters of protest were issued, and players are accusing bureaucrats in the world of championship chess of destroying the game, because, as they insist everyone should know, doping provides no benefits in chess.

It is suspected that Ivanchuk may have been taking anabolic steroids. Why would a chess player do such a thing? While steroids would certainly do nothing to improve cognitive performance, it can have a significant impact on helping a player keep his blood pressure down. It is not uncommon for chess players to start hyperventilating and gain a pulse of 200 late in tournaments. The beta-blockers in steroids would help keep a chess player's heart rate down and their head in the game.

So, is this truly an enhancement? What about Ritalin or Modafinil -- substances that increase the ability to concentrate? The rest of the world is using these drugs, including students, so why is it not sanctioned in the chess world? And what about coffee? Chess players are infamous for their caffeine intake habits. Should stimulants like coffee be banned as well?

Or is this just a slippery slope into increasingly nonsensical drug policies?

Like in so many other sports, the international anti-doping regime has gone too far. In the case of chess, it's obvious that the adoption of an anti-doping policy is merely an effort to have chess recognized by the IOC as an Olympic sport. Ivanchuk is being made a scapegoat by the World Chess Federation (FIDE) to prove to the IOC that they're serious about clamping down.

It makes no sense to ban steroids or other substances in chess, but the chess world wants in on the Big Show. And to do so they're going to terrorize some of their best players on rather weak grounds.