Clive Thompson on the 'Brave New World of Digital Intimacy' 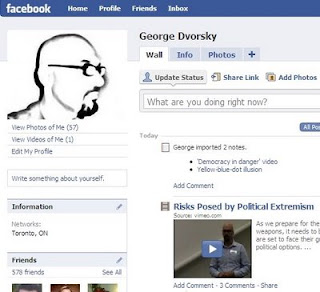 Clive Thompson has an outstanding article in the New York Times about social networking and the phenomenon of 'ambient awareness.' In the article, "I'm So Totally, Digitally Close to You," Thompson focuses on the relationships of loose ties that are now possible with the social communities created by such sites as Facebook and Twitter.

He describes the positive and negative impacts of ambient awareness and how it has been given a significant boost by frequent (if not incessant) online contact. As Thompson has observed, "...Facebook users didn’t think they wanted constant, up-to-the-minute updates on what other people are doing. Yet when they experienced this sort of omnipresent knowledge, they found it intriguing and addictive. Why?" He goes on to explain:

This is the paradox of ambient awareness. Each little update — each individual bit of social information — is insignificant on its own, even supremely mundane. But taken together, over time, the little snippets coalesce into a surprisingly sophisticated portrait of your friends’ and family members’ lives, like thousands of dots making a pointillist painting. This was never before possible, because in the real world, no friend would bother to call you up and detail the sandwiches she was eating. The ambient information becomes like “a type of E.S.P.,” as Haley described it to me, an invisible dimension floating over everyday life.

Back in 1998, the anthropologist Robin Dunbar argued that each person has a hard-wired upper limit on the number of people he or she can personally know at one time. He suspected that, due to cognitive limitations, humans could muster no more than 150 social connections on average. Interestingly, studies have largely proven Dunbar right.

But social networking has thrown the so-called "Dunbar number" into question. Without a doubt, Twitter and Facebook have allowed internet users to have far more social contacts than 150 (my Facebook number is at 578 and my Twitter followers are now up to 200 -- and quickly rising). The more relevant question now, says Thompson, is about the quality of those relationships, what we get out of them, and what it impact it may have on our closer relationships.

Read the entire article for much more insight.
Posted by George at 1/04/2009