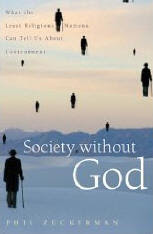 This book was released in October: Society without God: What the Least Religious Nations Can Tell Us About Contentment by by Phil Zuckerman.

Sociologist Zuckerman spent a year in Scandinavia seeking to understand how Denmark and Sweden became probably the least religious countries in the world, and possibly in the history of the world. While many people, especially Christian conservatives, argue that godless societies devolve into lawlessness and immorality, Denmark and Sweden enjoy strong economies, low crime rates, high standards of living and social equality. Zuckerman interviewed 150 Danes and Swedes, and extended transcripts from some of those interviews provide the book's most interesting and revealing moments. What emerges is a portrait of a people unconcerned and even incurious about questions of faith, God and life's meaning. Zuckerman ventures to answer why Scandinavians remain irreligious—e.g., the religious monopoly of state-subsidized churches, the preponderance of working women and the security of a stable society—but academics may find this discussion a tad thin. Zuckerman also fails to answer the question of contentment his subtitle speaks to. Still, for those interested in the burgeoning field of secular studies—or for those curious about a world much different from the devout U.S.—this book will offer some compelling reading.

Most Americans are convinced that faith in God is the foundation of civil society. Society without God reveals this to be nothing more than a well-subscribed, and strangely American, delusion. Even atheists living in the United States will be astonished to discover how unencumbered by religion most Danes and Swedes currently are. This glimpse of an alternate, secular reality is at once humbling and profoundly inspiring - and it comes not a moment too soon.

Email ThisBlogThis!Share to TwitterShare to FacebookShare to Pinterest
Labels: atheism

The way Danes and Swedes live is somewhat disconnected regarding the rest of the world. The raw materials and global infrastructure that allows them their lifestyle is mostly provided by the larger and more aggressive nations like the US.

The Swedes use a large number of Turkish guest workers for example. This mirrors America's use of its Latino workforce. These are functionally decadent nations. I say that in the social, not the moral, sense. They're perfectly lovely people from my experience.

I certainly believe that the metaphysical operating systems of Bronze Age desert nomads are severely outdated for a modern technological civilization such as ours.

But I also find 'global conclusions' of drawn from such semi-moribund societies as the Scandinavians to be highly suspect. I would include the total dismissal of the need for, and utility of, any and all types of metaphysical belief to be among those suspect conclusions.