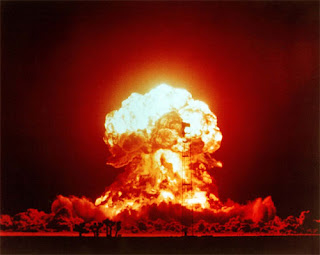 The New York Times takes a look at two new books about the history and future of nuclear weapons proliferation: "The Nuclear Express: A Political History of the Bomb and its Proliferation" by Thomas C. Reed and Danny B. Stillman, and "The Bomb: A New History" by Stephen M. Younger.

According to these insiders, the weapon was invented just once and its secrets were quickly spread around the globe:

All paths stem from the United States, directly or indirectly. One began with Russian spies that deeply penetrated the Manhattan Project. Stalin was so enamored of the intelligence haul, Mr. Reed and Mr. Stillman note, that his first atom bomb was an exact replica of the weapon the United States had dropped on Nagasaki.

Moscow freely shared its atomic thefts with Mao Zedong, China’s leader. The book says that Klaus Fuchs, a Soviet spy in the Manhattan Project who was eventually caught and, in 1959, released from jail, did likewise. Upon gaining his freedom, the authors say, Fuchs gave the mastermind of Mao’s weapons program a detailed tutorial on the Nagasaki bomb. A half-decade later, China surprised the world with its first blast.

The book, in a main disclosure, discusses how China in 1982 made a policy decision to flood the developing world with atomic know-how. Its identified clients include Algeria, Pakistan and North Korea.

Alarmingly, the authors say one of China’s bombs was created as an “export design” that nearly “anybody could build.” The blueprint for the simple plan has traveled from Pakistan to Libya and, the authors say, Iran. That path is widely assumed among intelligence officials, but Tehran has repeatedly denied the charge.

The book sees a quiet repercussion of China’s proliferation policy in the Algerian desert. Built in secrecy, the reactor there now makes enough plutonium each year to fuel one atom bomb and is ringed by antiaircraft missiles, the book says.

China’s deck also held a wild card: its aid to Pakistan helped A.Q. Khan, a rogue Pakistani metallurgist who sold nuclear gear on the global black market. The authors compare Dr. Khan to “a used-car dealer” happy to sell his complex machinery to suckers who had no idea how hard it was to make fuel for a bomb.

Why did Beijing spread its atomic knowledge so freely? The authors speculate that it either wanted to strengthen the enemies of China’s enemies (for instance, Pakistan as a counterweight to India) or, more chillingly, to encourage nuclear wars or terror in foreign lands from which Beijing would emerge as the “last man standing.”

Importantly, the authors go on to offer prescriptions for preventing the further spread of nuclear weapons. At the dawn of the nanotech weapons arms race, we need to be paying attention -- particularly given how quickly and how easily The Bomb got around.
Posted by George at 12/08/2008

I am not suprised tfo read how quickly word travels when it comes to weaponry. It is off-putting to realize that espionage isn't just in the movies. I wonder if I know any spies.....

I am made to wonder how long this kind of stuff can go on, before it gets ahead of us, and something really bad happens .....