Federal Tories architects of their own demise 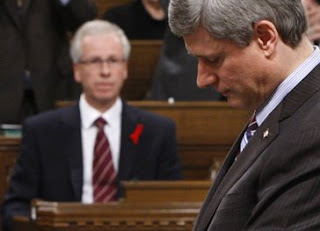 Last week’s economic status report from the federal Conservatives was too good to be true.

Now, that’s not to suggest that the Tories presented an overly-ambitious strategy for rescuing the slumping Canadian economy or that they unveiled an over-the-top stimulus package.

Rather, it was too good to be true because the Tories have now set the stage for their own demise. And for the 63% of Canadians who voted against the Conservative Party just 6 weeks ago, this is good news; the anemic Tories are about to be thrown out into the cold Canadian winter.

Indeed, the Conservative Party’s shocking inability to demonstrate to Canadians that they’re willing to do something, anything, to address the recession may prove to be the final straw. A parliamentary vote of non-confidence is now all but assured.

The Conservative response to the recession, or lack thereof, is certainly surprising given recent events south of the border. President-Elect Barack Obama assembled a 17-member economic advisory board just days after his election to help him piece together a recovery strategy -- a team that includes Warren Buffet and Eric Schmidt. And this on the heels of a hotly contested election in which the ravaged economy arguably tilted the results in Obama’s favour.

But here in Canada, our minority government (which acts and thinks like a majority government) has chosen to ignore the public's concerns and at their own peril; Canadians are getting increasingly worried as the manufacturing sector continues to collapse at a frightening rate. Even a hint of hope would be appreciated at this time.

But perception doesn't seem to matter to this government. Prime Minister Stephen Harper would rather play power-politics than draw inspiration from the United States. With millions of Canadians expecting at least something in the report, it came as a complete shock to get something even worse than nothing: in addition to more do-nothingism, Finance Minister Jim Flaherty unveiled a plan to curb party funding and ban public sector workers from striking.

This is the response to the worst economic crisis in modern memory? By attacking the other parties and protecting its own ass from potential union unrest?

Talk about a cry for help. This government is acting as if it wants to be put out of its misery.

Well, if all goes according to plan, a coalition government made up of the Liberals and NDP (and propped up by the Parti Quebecois) will remove the Conservatives as early as next week. And further to this end, the coalition has already hinted at a team of economic advisors that may include former deputy prime minister John Manley and former New Brunswick premier Frank McKenna.

This coalition may not prove to be the most effective government in our history, but it’s already step ahead -- even if only on paper.

I was watching the CBC tonight and Dion was also hinting that he might make Elizabeth May a Senator and give some Green party representatives a shot in government.
I don't like the way the Conservatives were trying to run this country, especially the way they would call people socialists like it was a political slur. Most of the reasons I love this country come from aspects of it that are inherently socialist, like our health care. I think taking the best ideas of the liberals and the NDP and leaving behind the stuff that most voters didn't agree with, like Dion's carbon tax,is awesome. the fact that they agreed on a plan in four days and are actually doing something about this recession is great proof that our parliamentary democracy can have more than two parties and we can actually have a united leftist party for a change!

I am glad to see that action is being taken in this dark time for our economy. I personally would love to see a Green Party representative in the govenment. Our country needs to keep its resources in mind when shifting our economy to compensate for the recession.

"And for the 63% of Canadians who voted against the Conservative Party just 6 weeks ago, this is good news..."

Ya, what about the approximately 74% who voted against the Liberal party.... this is a coup if I ever saw one...

Dood, what happened to "transhumanist perspectives on science, philosophy, ethics and the future of intelligent life"?
This blog was interesting when you talked about those things, but all these political rants about Obama, Palin, Canadian Conservatives, etc. are *extremely* ZZZZZZZZZZZZ. Please consider renaming your blog or starting a second blog, these recent topics are hardly worthy of discussion for the +2 sigma blogosphere crowd to which I thought "Sentient Developments" belonged.

@Sean: writing about politics is highly relevant -- particularly when it pertains to anti-progressive forces that are working to undermine the kind of present that is possible, and the future I'm sure you imagine.

Politics matters some but mainly at the communists take over China level or China shifts to capitalism. But even in those situations it is more a matter of where does the future happen. Because communists take over means millions of the best leave for Hong Kong, Taiwan, USA, Canada etc... for a big expat community and make contributions outside and for other places. Many who remain are suppressed and opportunities are squandered. The difference between Tories and the coalition are not that big in the grand scheme of things. Especially as both are weak and would not be able to push through really tough legislation or changes.

Obama and the Democratic congress. We will see how much difference and changes happen. Still Republicans at the state governor level.