Currently reading: The Black Swan: The Impact of the Highly Improbable 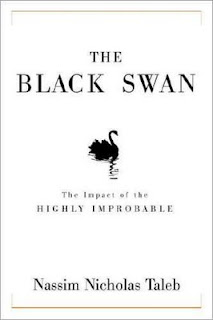 My copy finally arrived in the mail yesterday: The Black Swan: The Impact of the Highly Improbable by Nassim Nicholas Taleb. I'm looking forward to reading this one.

Taleb's 'Black Swan theory' refers to large-impact, hard-to-predict and rare events beyond the realm of normal expectations. Taleb regards many scientific discoveries as black swans, namely those that are undirected and unpredicted. He gives the rise of the Internet, the personal computer, World War I, as well as the September 11, 2001 attacks as examples of Black Swan events.

Chris Anderson, editor-in-chief of Wired magazine and the author of The Long Tail: Why the Future of Business Is Selling Less of More, offers this review:

Four hundred years ago, Francis Bacon warned that our minds are wired to deceive us. "Beware the fallacies into which undisciplined thinkers most easily fall--they are the real distorting prisms of human nature." Chief among them: "Assuming more order than exists in chaotic nature." Now consider the typical stock market report: "Today investors bid shares down out of concern over Iranian oil production." Sigh. We're still doing it.

Our brains are wired for narrative, not statistical uncertainty. And so we tell ourselves simple stories to explain complex thing we don't--and, most importantly, can't--know. The truth is that we have no idea why stock markets go up or down on any given day, and whatever reason we give is sure to be grossly simplified, if not flat out wrong.

Nassim Nicholas Taleb first made this argument in Fooled by Randomness, an engaging look at the history and reasons for our predilection for self-deception when it comes to statistics. Now, in The Black Swan: the Impact of the Highly Improbable, he focuses on that most dismal of sciences, predicting the future. Forecasting is not just at the heart of Wall Street, but it’s something each of us does every time we make an insurance payment or strap on a seat belt.

The problem, Nassim explains, is that we place too much weight on the odds that past events will repeat (diligently trying to follow the path of the "millionaire next door," when unrepeatable chance is a better explanation). Instead, the really important events are rare and unpredictable. He calls them Black Swans, which is a reference to a 17th century philosophical thought experiment. In Europe all anyone had ever seen were white swans; indeed, "all swans are white" had long been used as the standard example of a scientific truth. So what was the chance of seeing a black one? Impossible to calculate, or at least they were until 1697, when explorers found Cygnus atratus in Australia.

Nassim argues that most of the really big events in our world are rare and unpredictable, and thus trying to extract generalizable stories to explain them may be emotionally satisfying, but it's practically useless. September 11th is one such example, and stock market crashes are another. Or, as he puts it, "History does not crawl, it jumps." Our assumptions grow out of the bell-curve predictability of what he calls "Mediocristan," while our world is really shaped by the wild powerlaw swings of "Extremistan."

In full disclosure, I'm a long admirer of Taleb's work and a few of my comments on drafts found their way into the book. I, too, look at the world through the powerlaw lens, and I too find that it reveals how many of our assumptions are wrong. But Taleb takes this to a new level with a delightful romp through history, economics, and the frailties of human nature.