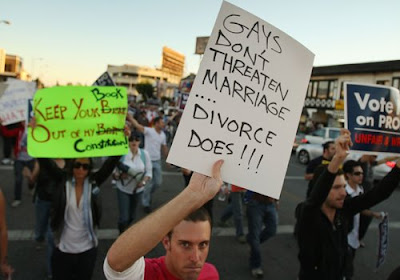 "There's something deeply wrong with putting the rights of a minority up to a majority vote. If this were being done to almost any other minority, people would see how un-American this is." -- Gay-rights lawyer Evan Wolfson

Same-sex marriage is coming, and for many it is already a reality.

Marriage, as defined by civil law, is currently available to same-sex couples in 6 countries. In 2001, the Netherlands became the first country to allow it. Since then, same-sex marriages have become legal in Belgium, Canada, Norway, South Africa and Spain, along with two states in the United States: Massachusetts and Connecticut.

From May 2008, California allowed for same sex marriages, though Proposition 8 recently overturned that right.

In 2005, Spain became the first country in the world to recognize same-sex marriage (including adoption rights) on equal terms and under the same law. Today, Canada, Spain and Norway are the only countries where the legal status of same-sex marriage is exactly the same as that of traditional marriage, though South Africa is expected to fully synchronize its marriage laws. Other countries all have requirements or restrictions that apply to same-sex marriage that do not apply to opposite-sex marriage.

It's a painfully slow process to gain legal recognition, but it is happening.
Posted by George at 11/09/2008

I've countered each of the standard arguments against gay marriage in my blog post here: http://insomnimusing.blogspot.com/2008/11/as-promised-my-rant-against-gay.html
I would appreciate any comment or feedback. Thank you.

Great post, goddess. Thanks for the link. I've not much to add, aside from saying that you hit on all the major issues.

Often, the big issue is that it's a parenting experiment and that we're somehow putting children at risk. I find this argument revolting not just because of its latent homophobic undertones, but because no one gives a crap about all those kids out there with lousy, unloving, neglectful and abusive heterosexual parents.

My feeling is that gay couples will be no less and no more effective as parents; this is hardly a dangerous experiment.

look at the expression on the face of the man in red and white, at the bottom of the photograph
does that look like the picture of someone who wants to wait for decades for the rest of society to catch up?
does that look the the picture of someone who is thinking in the logic of X and Y?
does that look like the picture of someone who wants to entertain comfortable intellectual considerations, mostly from the outside looking in, mostly from a distance, about the real lives of others?
it looks like some fire in the blood to me, like taking it to the trenches, and like pushing the envelope; and I'll tell you I know something of what that is like, because I have been there in different situations, and I am not just talking in terms of the view from the height
we're all in this together, and we all have different ways of expressing ourselves, but sometimes, we need to think a little more about how it feels for the other person

I agree with your heading: the majority should not decide for the minority. There are no rational reasons for gay people to not get married - so why shouldn't they?