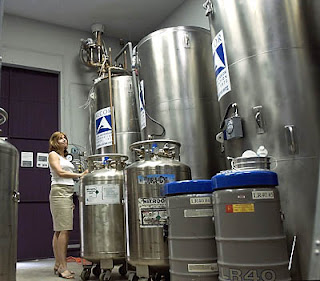 Tanya Jones of Alcor has opted for a Q&A format.

Whole body vitrification: largely depends on the fluid which is a cryopreservant that prevents the formation of ice crystals in the body. Works particularly well for organs, which was its intended application. Automated systems are being built that are dramatically improving the perfusing process. Large animal tests are planned before it's used on a patient, giving unprecedented control over the perfusion process. It's build on bypass operations used in hospitals.

Whole body vitrification isn't perfect yet, as some tissues accept the cryopreservant better than others. There's also still a struggle to get all patients vitrified at the facility. And like any medical procedure that's done today, "time is trauma." Alcor is working to minimize the damage.

Sources of funding: third by membership dues, third from cyro procedures themselves, third from private donations. Alcor can't sustain operations to the level they've built their operations at, mostly because of their optimistic and ambitious strategy. Currently re-focusing on revenue generating strategies.

Alcor currently maintains an ambulance vehicle that can be driven to a 1,000 mile radius. Jones says this makes a very large difference to the cases in which they're used. The ambulance has been used in two cases in particular thus far.

Pronouncement of death must happen before the vitrification process can begin. This is because the body is technically speaking an anatomical donation.

Air-transportable perfusion systems have been redesigned around new airline regulations. Kits have decreased in size and weight. This has positive implications for quick team mobilizations. It's also become easier to train people -- a team that's mostly made up of non-medical professional volunteers. It's an extremely efficient system to prime.

Most recent case was an individual who suffered cardiac arrest while snorkeling in Barbados. It took Alcor 5 days to get the body. He was packed in dry ice for shipment for 3 days before Alcor got him. After 5 days it's impossible to do a vitrification so it was a straight freeze in liquid nitrogen. It's a two stage process -- first plunge to -110, second to optimal freeze level.

Alcor is currently working on the fracturing problem (e.g. brains cracking like ice cubes thrown in water). They believe it's possible to develop a protocol to eliminate fracturing. The key is to get pure cryprotectant down to -196: the temperature of liquid nitrogen. If you do it right, you can keep objects preserved for 1,000 years when immersed in liquid nitrogen.

Alcor is also concerned that fracturing is not the only problem -- that there's something else from preventing the organs from being revived.

Alcor recently received a grant for readiness capability. They're going to use this money to improve their kits and all their technologies. They're distributing the new med kids, to build the new perfusion systems for the teams (once they've decided that they work as intended). Currently looking to other plans, taking it slow and carefully.

Funding aspect is still a place where Alcor is behind where they need to be. Before a marketing strategy can be put into place, Alcor wants to suss out where potential members are coming from. What makes people really choose to sign up? And success could be detrimental if suddenly a thousand people signed up overnight. Alcor's scaling model simply wouldn't allow for it.

Long term vision: Alcor knows that bureaucracy can impede smooth vitrification processes. Jones claims that legal impediments exist in every jurisdiction they work in. They want to smooth this process.

Alcor would like to do whole body vitrification on site, and then transport the bodies at the optimal preservation temperature for delivery to Alcor's facility in Arizona. They're even considering something on an airplane.

Jones says that it can take some people from 1o to 20 years to make a decision about signing up for cryonics -- which doesn't take sudden death into account.

Training is in hiatus until the new kits get sorted out. Teams will be flown to Arizona and be given hands-on training.

Is it safer to do neural or whole body? Neural is still slightly better because of the time it takes for the cryopreservation process to be completed.
Posted by George at 11/16/2008

"Teams will be flown to Arizona and be given hands-on training."


I wonder how Alcor will "fly" anyone anywhere in coming years given the collapse of the airline industry, due to both the coming depression and the decline of oil supplies, as the International Energy Agency forecasts.