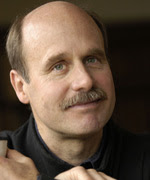 Saffo is often asked, 'Are you a futurist or a forecaster?' A forecaster cannot slide into that advocacy role. The forecaster needs to be a bystander to events, whereas the futurist says, "this is the direction I think we should all go." Paul Saffo is saying that futurism should be a science, not a religion.

"If we don't change directions soon, we are most certainly going to end up where we are headed," says Saffo.

Alfred Hitchcock's law of futurism: the future will have long stretches of dullness in it, the exciting parts will be exciting because they have exciting parts in it -- but then it'll become dull again. [Note: Hitchcock said that "movies are reality with the dull parts edited out."]

Saffo draws a comparison to all the 1980s excitement surrounding the advent of cyberpace via the cyberpunk novels. It was thought that it would usher in a new era of human advancement and sophistication.

We need to question our assumptions. Is it really convergence? Maybe things are diverging? Didn't we talk about convergent technologies in the 1990s? This resulted in a divergence of products and industries. It may not exactly turn out the way that we think.

He quips that we live in 'cyberbia.'

Saffo makes the case that change is never linear. The problem is that we are linear thinkers. We like to draw straight lines. Consequently, people are always surprised when the inflection points hits (e.g. advent of the Web).

We've been on the edge of an AI revolution for 50 years.

We should cherish failure, says Saffo, especially when it's somebody else's. Columbus isn't remembered because he made it to the New World, he's famous because he made it back. Another example is the Grand Challenge involving robotic cars; 18 months after a shocking failure in which the bots didn't get more than 7 miles, a number of robo-cars were successfully able to cross the finish line.

To be successful, look for something that has been failing for 20 years.

Saffo says, "Look back twice as far." There is a wrong way to use a rearview mirror -- the right way is to look for the relevant patterns. As Mark Twain said, history doesn't repeat itself, at best it rhymes. We need to look for the rhymes.

Every decade we have a new enabling technology that arrives and establishes a landscape. We had the processing decade in the 70s. The 80s brought the communications laser which introduced fiber optics and digital encoding of data. In the 90s we were given greater bandwitdth (enabling us to better network together). In the current decade it's cheap sensors. This had led to an explosion of products with cheap sensors.

Another rule of thumb is to look for indicators -- things that don't fit, things that are just weird. Good forecasters quickly come to a conclusion and then work to systematically demonstrate that they are wrong, while looking for indicators that may be important.

Take the Roomba -- the robotic vacuum cleaner. [Saffo asks, "When was the last time anybody gave their vacuum cleaner a name?" -- gets good reaction from audience)] This was an indicator to Saffo that there was something up with this new technology.

Saffo shows a picture of an awful auto wreck -- one that took place before a Grand Challenge race. Over 118 cars smashed into each other. "Proof," says Saffo, "that people shouldn't drive." [audience applauds] Saffo says we should be more afraid of human drivers than robots.

Those who think the farthest wins, says Saffo. We are all proud of ourselves because we think in the longterm.

Though, he warns that not all people go about this correctly or responsibly, like this book: Left Behind: A Novel of the Earth's Last Days. Still, says Saffo, religious communities are typically the longest term thinkers. A reading recommendation to help explain religous long term thinking: "A General Theory of Bureaucracy"

"We also need to find those short term opportunities that will really change tomorrow," closed Saffo.

Saffo is put to task by Eliezer Yudkowsky about his claim that religious communities are typically the longest term thinkers and his reference of the Last Days book. He responds by stating matter of factly that it's simply true and that many fundamentalists simply think this way.

Second question again addresses the fundamentalist issue, much to the frustration of Saffo who jokes that he should have left out the last slide.

Question from audience, "are we getting better at looking at the future and the past." Saffo feels that we're teetering on the edge of acquiring real quantitative forecast tools. The convergence of four factors will change the futures field:
Our methods will change dramatically over the next half-decade.

Question from audience: wants elaboration on the claim that technologies get ossified (i.e. we initially resist the full potential of new techologies). Saffo claims that we collectively resist change. New technology comes in, is used for an old thing, and then eventually is brought to its full potential.