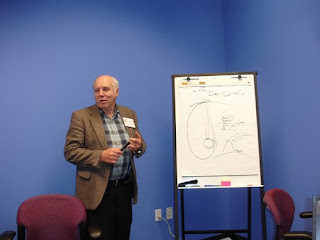 How do you get to cheap energy? If you can get a penny per kilowatt hour you can get a dollar a gallon gasoline. The only way to get this is to draw solar power from space.

How do you get this energy back to Earth? The space elevator would make this easy. The key load is to get down to 100/kilogram to orbit.

There are a number of ways to make this happen:

The space elevator, which we can't make yet.

Extracting energy from space-based solar panels and mirrors: using pop-up and push (slow, low energy ascent) to bring objects into orbit, and drawing the energy from mirrors in geosynchronous orbit; technique would use ablation propulsion. This would provide enough energy to replace all fossil fuel. The energy is sent via microwaves to massive dishes on the planet (dishes that are miles across).

Henson claims the U.S. military has shown an interest in this, not just to deal with energy issues, but to provide energy to the entire planet so that motives for war are drastically reduced.

This solution would deliver power to the grid by adding 1 gigawatt of new power to the world's supply of power every day by 2015; at a cumulative cost of $800/kilowatt, or about $800 billion/year. Considering the amount of energy we're talking about here, this is more than worth it.

You could use this energy, for example, to create synthetic oil. Getting energy in this way would suddenly make it worth it. We're still going to need fuel for quite some time. You'll never be able to run planes on batteries, for example.

Unfortunately, this same technology could make for a nasty weapon (using the microwaves), but something that's relatively easy to counter.

Henson claims you can suck CO2 out of the atmosphere and make it into oil.

A key challenge is to get this project started and to fund it. The first watt will be the most expensive.

That said, some commentators believe this is a done deal, that a) it's a no brainer and b) other groups and countries are actively pursuing this.
Posted by George at 11/15/2008