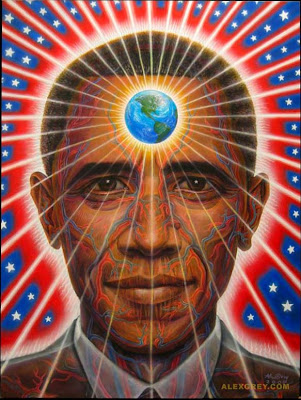 "After hearing Barack Obama's speech in Berlin, and noting the degree of excitement and hope that he generated throughout many countries besides the US, I started to see him as one of the first true "world leaders." This may be partly because of his extraordinary childhood and political life that has bridged many cultures. Obama's restraint and intelligence, exhibited as foes were bating him throughout the campaign, his heartful clarity coming through in his talks are all qualities of a highly evolved person.

We need to consider our planetary citizenship, because solving the world's ecological and economic problems, and creating a culture of peace and reconciliation will require the co-operation of all nations.

Perhaps you can use this symbol of Barack Obama to send him a prayer of support, to send all the loving hopeful healing and creative energy that we can focus on him so that he can perform the task of leadership in the most effective and powerful way for the greatest good, for the greatest number." -- Alex Grey

this is great < ! >; thanx for posting this one

I like Obama and I'm hugely relieved to have him as our next president -- but this painting strikes me as so much messianic kitsch. Which is perhaps doubly odd, as I think highly of Alex Grey's work as well.

Mac, I don't entirely disagree. It also has a 'we are the world' quality that's a bit off-putting. I deliberately posted it without any commentary to see what kind of reaction it would get. Hopefully more people will chime in with their opinions.

Disgusting and terrifying for every german to whom I showed this. Even people who out of imcomprehensible reasons - prolonged Wilber-fandom? coupled with his cover art for "Tools" - liked his works. Can you comprehend what a german, italian oder phillipinian citizen feels and thinks about that? Hadn´t this, your election also been about and against this sort of "we, the americans are the world"-ideology? Next step: Obamessias shown as he makes his first cut with a spade for the renewed "Autobahn". This picture is a symbol of a deep, deep problem in american self-conception.

Sorry to comment on such an old post, but I feel that this needs a bit of defense.

I personally feel that Grey didn't mean this to portray the "We are America, we are the world" ideal as Siggi said. Rather, I think he purposely placed the image of Earth over the 7th primary chakra point. Wikipedia says about this chakra that "Sahasrara chakra symbolizes detachment from illusion; an essential element in obtaining supramental higher consciousness of the truth that one is all and all is one."

Rather than raising the US over the rest of the world, I believe he meant this symbolism to convey that Obama will try to unite the world, as is evidenced by the accompanying quote.

I can see how people from other parts of the world may be immediately biased as, admittedly, the US is generally an asshole... but like I said, I felt this just needed a bit of defending.

amen, indeed
and for that
blessings, and high thoughts

In the economic world, irrational optimism (plus a good bit of monetary "easing") creates bubbles that must burst. We look back and say "that was crazy that we thought eToys was worth that much with no business model", but we move seamlessly to the next even bigger bubble in the "house prices always go up" world of real estate and don't notice the similarity, even though it is even bigger!

If you were caught with your pants down in either of these manias, please have a close look at your optimism about this new political leader. Presence is a wonderful thing, but when it is combined with delusional economics (it is time to recognise the US economy as a whole is a giant Ponzi scheme, going more in debt only puts off the day of reckoning at the price of making the inevitable bust worse), watch out.

Anybody interested in re-evaluating the state of the worldcentric view of Mr. Obama? Perhaps through the eyes of Mr Gordon, the assistant secretary of state for European affairs?

“We want to see a strong and united Europe, speaking with one voice. In the best of all possible worlds, that one voice will be saying what we want to hear….If it is not saying what we want to hear, then we would rather that voice was less united. For the foreseeable future we will have to have relations with the EU and with nations. You go to the place that can deliver... [For example] on trade, we deal with the EU, as the EU is the decider.”

One more try to recalibrate the worldcentric view of Mr. Obama?

This is terrible. I've just lost a butt-load of respect for Alex Grey. If an informed, intelligent, and -connected- man like Alex feels this way about the UN's Messiah then I can only conclude he hasn't thought this through for 5 minutes or he's working for "The Agenda".
Anyone can be whisked away into fantasy by well-placed words and concept. Did you know Humans can TALK!? We're the biggest talkers on the planet, and also the biggest liars.
Obama is an impotent mask of the Status Quo, nothing will change under him except the same gradual disarmament of the world citizenry and the strengthening of a Global Police Force.

If this is your new world of "Peace and Reconciliation", Alex, I don't fucking want it.