Oliver Stone and the accidental president 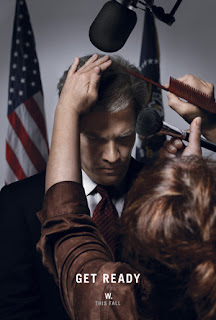 When I first heard that Oliver Stone was making a film about George W. Bush I immediately assumed that it was going to be an unapologetically liberal roast-fest. I imagined W. to be a scathing and unrelenting portrayal of arguably the worst president the United States has ever seen.

With popular culture fueling my expectations, I imagined a surreal and glib rendition of the current administration along the lines of Saturday Night Live or the Colbert Report.

But after reading the reviews and hearing about Stone's supposedly 'fair' and 'balanced' portrayal of Bush, I started to pay more attention. Some commentators went so far as to say that the movie made them feel pity for the man.

Pity for Dubya?
What was Stone up to? This is the last director, I thought, who would let the Bush administration off easily.

And Bush is the last president, I thought, who deserves anyone's pity -- a man who has done more to terrorize people at home and abroad than the terrorists he's worked so hard to combat; a man who started an illegal war in the Middle East that has caused the deaths of nearly 100,000 civilians; a man who ignored one of the worst natural disasters to strike the US in modern memory; a man who has created unparalleled divisiveness amongst his own people. I could go on.

And even for me -- a Buddhist who strives to practice universal compassion -- this man has put my patience to the test.

Given all this I was very motivated to see and judge this movie for myself.
Powerful cinematic realism

And indeed, it was no late-night television caricature. Rather, W. is a typical Hollywood foray into super-realist cinema. But it is a realism that is far more upsetting and revealing than any pithy character attack.
By painting a fairly objective and first-person portryal of Bush, and by dramatising the twisted machinations and personalities of his administration, Oliver Stone has created a disturbing film that undoubtedly offers more impact than any other approach. The realness of it -- being right there amongst the major players and watching the events unfold -- cast an eerie light on not just this administration, but on the United States itself and how politics is done in that country.

W. subtly reveals the perils of populist politics by chronicling the unexpected and advantageous chain of events that brings the most unlikeliest of men to the White House. During one scene, for example, the campaigning Bush touts his ability to connect with ordinary citizens on account of his experience running the Texas Rangers baseball club. It's impossible to watch this scene and not think of Sarah Palin as she uses her experience as a hockey mom to appeal to populist sensibilities. This is an America that is consistently asking for trouble by grossly over-estimating the abilities of certain politicians.
The deluded decider
Stone presents a George W. Bush who is ignorant, arrogant and shockingly unreflective -- a man who is driven by sheer ego and an unchecked desire to prove himself. At no time does this man ever question his own qualifications; in fact, the movie portrays Bush as a man who actively deludes himself into thinking that the ideas of his advisors are his very own.
He is the 'decider' after all. But he comes across as the puppet president who doesn't realize how utterly dependent he is on others and how they pull his strings. And when things don't go according to plan, he retreats like a sulking teenager to his room to watch sports highlights.

Yes, Oliver Stone created a fair portrayal of Bush and it is within this fairness that we find truth and insight. But just because we get to see a humanized George W. Bush in context doesn't diminish the horrors of this administration. If anything, it reveals a far more frightening snap-shot of Bush's first term than could have been expected.

This is the story of the accidental president who, motivated by ego and a deluded sense of religious mission, utterly failed to acknowledge that his weaknesses and deficiencies as a person made him a poor candidate for the executive office. The end result was, as proclaimed by the imaginary figure of his father, a complete fiasco.

So, is this a man who deserves our pity? Well, insofar as he is a man blinded by ego and delusion, yes he does. This man has lacked the courage and humility to admit his weaknesses, and as a result, took advantage of a country that celebrates the notion that anybody can grow up to become president.

Indeed, any American can become president of the US -- of that we are now certain. But that doesn't mean that everybody should.
Posted by George at 10/25/2008

excellent piece, but it is painful, because it puts such a mirror to the American people, showing how we gloss over the most important of things; what kind of autopilot are we on?

Very good article. For the record, though, it's worth pointing out that the estimated number of civilian casualties currently stands at anything up to a million or more (going by the Lancet studies and, more recently, the ORB survey). Despite the predictable ridiculing of these studies by the US and UK governments, they were conducted by respected, independent researchers, using well-regarded methodologies. Even allowing for the greatest margins of error, it seems not unreasonable to conclude that the Iraqi civilian deaths resulting from the invasion could now total at least several hundred thousand.

I havn't seen this movie, and in my opinion it's really too soon to judge the Bush regime properly, since additional information will no doubt come to light after he has left office - emails, biographies, people who feel free to speak without fear of retribution, etc.

If the movie had been made maybe one or two years from now I think it would be likely to provide a more intelligent portrayal of what actually went on during the last eight years.

bob:
if you have been living in America for the last eight years, then you know what has been happening, and much of it is anything but good or what we need
you are right in that we need more information, which, when it becomes available, will add more nails to the coffin