The notion that 'Western man has stopped evolving' is wrong 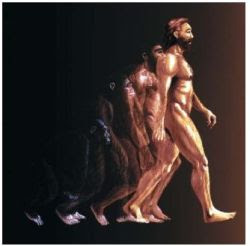 Steve Jones, head of the department of genetics, evolution and environment at the University College London, says the forces driving evolution, such as natural selection and genetic mutation, "no longer play an important role in our lives."

Consequently, says Jones, the people living one million years from now -- assuming humans will still be around -- will resemble modern-day humans; he thinks that humans have stopped evolving.

He basically argues that the mechanisms that drive ongoing variation are now absent in modern life, a factor that he believes has halted evolution.

I think Jones is a bit off the mark, here. Evolution and genetics are more than just adaptation to changing environments and stressors. His analysis fails to take a number of factors into account, including:
Genetic drift
Also known as genetic randomness, this genetic process involves the accumulation of random events that slightly change the makeup of a gene pool, but are compounded and re-enforced over time. Genetic drift arises from the statistical effect of sampling errors during reproduction across the overall population.
Jones dismisses this possibility on account of the large and interlinked global population -- a consequence that prevents small populations of people from evolving in isolation. It's conceivable, though, that genetic drift (in conjunction with other genetic mechanisms) will slightly alter human morphology given long enough time frames. Moreover, as the number of people increases, so too do the number of mutations generated by random chance.
Vestigiality
All morphological and psychological characteristics must have their genetic integrity re-enforced over time through the process of natural selection; environmental pressures continually justify a trait's presence and integrity within the genome. A physical trait that is no longer important to a species' survival will start to lose its informational integrity over time, leading to diminished function and eventual disappearance.
Given Jones's suggestion that selectional pressures have stopped for humans, it's likely that many of our unnecessary characteristics will slowly fade away. What Jones doesn't account for, however, is that this will result in morphological alterations.
Sexual selection
Not all evolutionary changes are brought about by seemingly rational environmental pressures. Sexual selection and competition for mates has led to some bizarre and often nonsensical changes to species (think of the male peacock's tail feathers, for example).
Humans are still very much in the business of competing for and selecting mates. Again, given long enough time frames, and given inevitable changes in perceptions of human beauty and fitness, this could lead to changes within human morphology and psychology.
Gene expression
The human genome is not a stand-alone document -- it needs environmental stimulai to inform it as to how it should express itself. Because humans live in a diverse set of environments, and because we are all raised in unique settings, our minds and bodies are moulded accordingly (this is why identical twins separated at birth are not 100% identical and why clones will be even less identical).
Given the potential for even greater environmental diversity in the future (i.e. barren desert wastelands brought about by global warming...I'm only half-joking), it's not unrealistic to think that our genes -- even if they collectively remain somewhat static -- will express the human species with some variation.
Look at the difference, for example, in height over the past few generations. And imagine the kinds of bodies that our genes would express in a different gravitational environments like Mars or space itself.
...and last but certainly not least:
Self-guided evolution
Darwinian natural selection is giving way to self-guided evolution. The human species will soon have a host of transformative technologies in its possession that will allow us to modify our bodies as we see fit.
Some of the key technologies in this area will include genomics (and other biotechnologies like regenerative medicine), molecular nanotechnology, information technologies (like the integration of AI), and advances in cognitive science. This will lead to the so-called posthuman, which could be anything from cyborgs and genetically enhanced humans through to uploaded consciousness streams.
And if anything, humans are evolving faster than ever -- even without the aid of technology.
Posted by George at 10/07/2008

Peacock tails are "nonsensical"? This is certainly news to me. Peacock plumage, like rooster wattles, are a dramatic means of expressing vitality to prospective mates.

Nonsensical in that it's created an arms race between other males such that a) it doesn't increase the fitness of the bird from an adaptive perspective (it's also a waste of the organism's energy) and b) it has led to a certain degree of complexity that may prove to be a dead-end.

I agree with you on the first point but I'm not sure I follow your comment about complexity.

I can't tell you how happy I am that self-guided evolution will soon be more than speculation, and that it will allow for a truly open-ended experience. It's almost a tyranny the way things are set up now, and the way they have been for so long. Sentient mind is ready to move on, to expand, and do other things. It is liberating to think about what is going to be possible.
I know that there is a lot of resistance to self-guided evolution, especially uploading and transhumanist states. But where do people get the idea that biology, and the human being, are the final word in the ongoing evolutionary process?
In general, I am all for moving out of the sandbox and into greater domains. I know there are many issues and problems that lie ahead, but that has always been the case, and I believe that these things will be dealt with, and many limitations will be overcome.
It is sentient being that is moving onward and upward. And for that, I would say, that these are truly great days.