Reaction to the Phoenix parachute photo 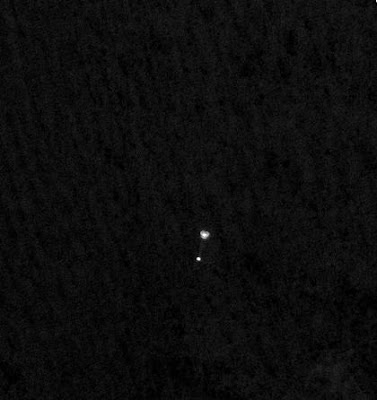 "Man, we've got Mars so heavily instrumented that a surveyor in Martian orbit caught the polar lander *on its way in*." -- Bruce Sterling

"See that thing in this image that looks like a Martian vehicle descending by parachute to the surface of Mars? That's the Phoenix lander, captured in mid-drop, still glowing from entry into the atmosphere, by the Mars Reconnaissance Orbiter. How badass awesome is it to be a human? Super badass awesome." -- Cory Doctorow

"That is exactly what you think it is: Phoenix descending to the Martian surface underneath its parachute. This incredible shot was taken by the HiRISE camera on board the Mars Reconnaissance Orbiter. You can easily see the ‘chute, the lander (still in its shell) and even the tether lines!

Think on this, and think on it carefully: you are seeing a manmade object falling gracefully and with intent to the surface of an alien world, as seen by another manmade object already circling that world, both of them acting robotically, and both of them hundreds of million of kilometers away.

Never, ever forget: we did this. This is what we can do." -- Phil Plait

And here is what I have to say about the Phoenix: The Heirs of Prometheus. Long and romantic, but the subject invites it.