Pistorius allowed to qualify for Olympics 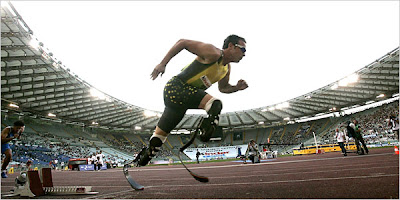 Unexpected news today: Disabled sprinter Oscar Pistorius will be able to qualify for the 2008 Olympic Games after all.

The Court of Arbitration for Sport overruled an earlier decision by the International Association of Athletics Federation that made Pistorius ineligible for competition against able-bodied athletes. According to the Court, the IAAF has not conclusively proven that Pistorius is given a decided advantage from his 'Cheetah' prostheses.

According to the New York Times article:

What the decision means for other disabled athletes hoping to compete in the Olympics is that they will be allowed to compete with able-bodied athletes unless the I.A.A.F. can provide indubitable scientific evidence to the contrary. In the past, I.A.A.F. spokesman Nick Davies has insisted that these matters can only be treated on a case-by-case basis with the burden of proof on the athletes to show that the prosthetics do not provide an unfair advantage.

I have always thought that if i lost limbs, i would still find a way to drum. Noone critised, persecuted or tried to stop Rick Allen of Def Leppard when he found a way to drum with 1 arm and 2 legs...his band supported him and the world praised his perserverence and ingenuity. In fact, their first album featuring their 1-armed drummer is one of the most successful in history, with 7 hit singles. So there!

Would i begrudge my deaf partner if there existed technology that allowed her to hear BETTER than a hearing person? Certainly not.

Perhaps my response to this precedent-setting news is more emotion than science. I have been shown "exceptionality" where i formerly saw "disability" and feel strongly that we do not look at the differences between us correctly. This emotion coupled with my dulled brain after a night shift, and a mere layperson's understanding of energy transfer and oxygenation (2 of the arguments i have heard against the acceptance of this sprinter's prosthetics), leads me to simply say:

That picture is simply mesmerizing. Look forward to hearing how he does.