One year ago on SentDev: When hypergiants go hypernova 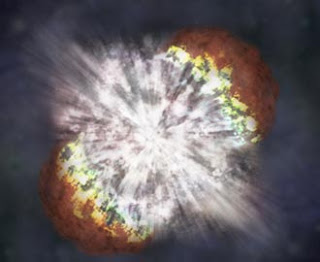 Scientists predicted that something like this could happen, and now they have actually observed it: a hypergiant star went nova.

About 238 million years ago a star in galaxy NGC 1260 ended its life. To say that it was a powerful explosion would be a gross understatement; the amount of explosive energy expelled by supernova SN 2006gy defies human comprehension.

Prior to its dramatic death, the hypergiant star, which was 150 times larger than our own, suffered a sudden and violent collapse. Extremely high levels of gamma radiation from the star's core caused its energy to transform to matter, and the drop in energy in turn caused the star to collapse. This resulted in a dramatic increase in the thermonuclear reactions that was burning within it. All this added energy overpowered the gravitational attraction causing the star to explode.

And explode it did.

Scientists claim that the supernova was over 150 times more powerful than any other observed to date. Physical models suggested that such a supernova was theoretically possible, but astronomers believed that such events were limited to the early Universe when stars tended to be hypergiant.

A hypernova like SN 2006gy can instantly expel about 10X46 joules. This is more energy than our sun produces over a period of 10 billion years.

According to the Astroprof blog,

At discovery, it was already as bright as a Type Ia supernova at its peak. But, instead of getting dimmer, SN 2006gy continued to get brighter for several weeks. The peak brightness seldom comes much more than a week after the explosion. Theoretical models suggest that SN 2006gy gets its light from both the expanding cloud of gas and a shock front as the cloud of gas expands into very dense gasses surrounding the progenitor star. But, the expanding gas cloud is so bright that it requires substantially more radioactive decay to heat it that would be present in almost any other supernova. The best way to get that much radioactive material, according to the model that the theorists have come up with, is for basically the whole core to be thrown out into the supernova, leaving little or nothing behind to form a neutron star or black hole. So much material is thrown out, that the supernova continues to be heated long after the explosion itself. In fact, even months later, SN 2006gy has faded in brightness only to as bright as the peak brightness of a Type Ia supernova!

In fact, astronomers were able to observe the hypernova's peak brightness for an astounding 70 days.

Supernovas can wreak tremendous havoc in its local area, effectively sterilizing the region. These explosions produce highly collimated beams of hard gamma rays that extend outward from the exploding star. Any unfortunate life-bearing planet that should come into contact with those beams would suffer a mass extinction (if not total extinction depending on its proximity to the supernova). Gamma rays would eat up the ozone layer and indirectly cause the onset of an ice age due to the prevalence of NO2 molecules.

Supernovas can shoot out directed beams of gamma rays to a distance of 100 light years, while hypernovas and gamma ray bursts can impact areas as far as 500 light years away.

Thankfully, hypergiant Eta Carinae, which is on the verge of going nova, is well over 7,500 light years away from Earth. We'll be safe when it goes off, but you'll be able to read by its light at night-time.
Posted by George at 5/10/2008