One year ago on SentDev: How will our Universe die? 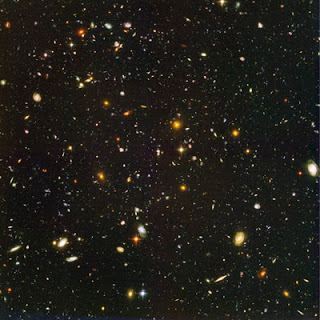 An interesting theory has emerged which predicts that trillions of years into the future, the information that currently allows us to understand how the universe expands will have disappeared over the visible horizon. All that will remain will be "an island universe" made from the Milky Way and its nearby galactic Local Group neighbors. What's left will be a dark and lonely void.

The theory was put out by physicists Lawrence Krauss from Case Western Reserve University and Robert J. Scherrer from Vanderbilt University. Their research article, titled, "The Return of the Static Universe and the End of Cosmology," will be published in the October issue of the Journal of Relativity and Gravitation.

This brings to mind a number of different theories in the field of cosmological eschatology.

The work of Krauss and Scherrer stands in sharp contrast to another end-state theory, namely the Big Crunch. In this model, the momentum of the Big Ban will eventually wane causing the Universe to collapse in on itself. But due to the recent revelation that the Universe is not just expanding but that its expansion is speeding up, newer theories have suggested that the Universe will continue to expand forever.

This has lead to some rather bizarre conclusions, including the emergence of a theory known as the Big Rip. According to this theory, the Universe will start to expand at such a rapid rate that all its elements, from galaxies to atoms, will be torn apart by the extreme expansion rate of the Universe. This is scheduled to happen about 20 billion years from now.

The force that is causing the Universe's matter to push outwards is what's known as dark energy. This is why galaxies are moving away from each other -- and why they will continue to do so until gravity will be too weak to hold them together.

Eventually, in the final months of the Universe, our solar system will be gravitationally unbound. In the last minutes, stars and planets will be torn apart. And in the Universe's final spastic salvo all atoms will be destroyed.

Another possibility is the Heat Death of the Universe, also known as The Big Freeze. In this model the Universe would continue to expand forever, but it would enter into a state of maximum entropy in which all matter and energy is evenly distributed; consequently, there would be no 'gradient' to the Universe -- a characteristic that is needed to sustain information processing, including life.

Other possibilities include the False Vacuum, where the laws and constants of the Universe are subject to radical change, and various multiverse theories in which the cosmos is expressed in a infinite number of iterations for an infinity.

Another more radical possibility is that the future of the Universe will be influenced by intelligent life. Theories already exist in regards to stellar engineering -- where a local sun could be tweaked in such a way as to extend its lifespan. Future civilizations may eventually figure out how to re-engineer the Universe itself (such as re-working the constants) or create an escape hatch to basement universes.