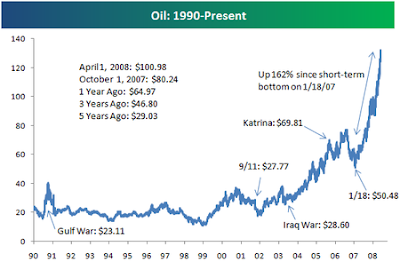 We are still practicing our economics with a 19th century flawed model..

Oil all energy is a vital infrastructure asst and or resource..

We must Nationalize the American Oil Companies if we do this we will create an Economic boom we can cut costs by 30-35% and still have from $50-60 Billion per year for alternative energy development and new technologies which will add to the economic boom..

Many people do not realize that 49% of OPEC is the American Oil Companies and they do not pay $135.00 per 42 gallon barrel they make 200% per barrel or damn close then an additional 33% per gallon of gas..

There's a lot more to this but it's time for us to enter the future these Oil companies are bringing America and it's people to their knees and I for one will have none of it..

Or, y'know, we could use nuclear power, which is now cheaper to create than any other source.
And cleaner.

[By the way, Chernobyl was an accident caused by a bypassing of the safety standards set in place to test the reactor's upper limit. It exploded because people are idiots. So don't use that as a reason against it.]