Of dead race horses and the dead long-ball: Two very different consequences of enhancement in sports 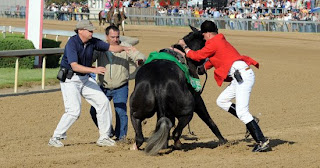 On May 3, 2008, shortly after finishing second at the Kentucky Derby, filly Eight Belles went crashing to the ground, the result of sustained compound fractures to both her front legs. The horse's injuries were so devastating that she had to be euthanized right there on the track, much to the horror of the 157,770 spectators.

What do these two seemingly unrelated stories have in common?

The first story showcases the tragic consequences of enhancement overuse in sports, with the second showing the dramatic way in which performance-enhancement can impact on a sport -- particularly if it's taken away.

And love it or hate it, both stories show the extent to which enhancement is impacting on sports today.

Catastrophic injuries like the one experienced by Eight Belles is becoming a disturbingly regular occurrence at racetracks across the United States.

Of the major thoroughbred racing events (the Kentucky Derby, Preakness, Belmont and Breeders' Cup) half of them have seen lethal breakdowns since 2005.

It's gotten so bad that PETA has entered the picture, calling horse racing "cruelty masquerading as sport." They insist that organizers make major changes to horse racing, or face an all-out ban.

Which leads to the question: why are horses increasingly crossing the finish line completely wrecked?

There are a number of factors, but two stand out in particular: breeding and drugs.

Racehorses are bred for speed, not durability. These days, the average number of races run by a horse is 6.37. Back in the 60s a horse could be expected to run 11.31 races. Racing breeds are becoming more brittle with each passing generation.

The only consideration at breeding time is selecting for speed and a horse psychology that says 'run like hell' (or what industry folk call 'precociousness'). As equine surgeon Wayne McIlwraith has said, "We've evolved a super-fast athlete."

More significant, however, is the use of medication. Horses are given drugs to deaden pain, to prevent pulmonary bleeding, to ease joint inflammation, and, of course, to add muscle.

This is all perfectly legal. American racing adopted a policy of "permissive medication" during the 1970s which allowed for drugs banned in other parts of the world (which may also explain why these sorts of injuries aren't happening elsewhere).

There's also the problem of illegal drug use -- horses are given everything from cocaine to cobra venom (used as a numbing agent).

No wonder horses are ending races completely shattered. Medical science has exceeded their biological tolerances, and horses are paying with their lives.

The statistical achievements they were referring to included the astounding home run records set by Mark McGuire and Barry Bonds in 1998 and 2001 respectively. Steroids have changed the sport to such a degree that there have been calls to "asterisk" all records set during this era.

But this era appears to be over. Owing to a Congressional Committee, the ensuing Mitchell Report and tougher drug-testing programs, it appears that players have been scared straight.

Home run production has dropped dramatically, putting to rest silly notions of juiced balls and corked bats. Steroids has been quite clearly a major force in baseball in recent times.

Clearly, in the case of horse racing, there's a significant problem. Until they can engineer cyborg horses who can actually survive a race, there has to be some serious soul-searching done amongst the organizers and owners. What's currently happening is beyond the pale.

As for baseball, one could make the case that the McGuire/Bonds years were some of the most exciting to ever grace the sport. As anyone who follows baseball knows, pitchers have traditionally held a decided advantage over hitters. It's been a very defensive game.

Steroids, for better or worse, altered this balance. Personally, I'm having a hard time getting into the current baseball season, particularly here in Toronto where the Jays can't score runs to save their lives.

I'm likely not alone when I say that I enjoy watching home runs and would like to see more.

I'm not a fan of medication bans. As a transhumanist, I look at the entire issue as a part of the broader trend in performance-enhancement across all spheres, whether it be physical or cognitive aspects.

But I have my limits. Like anything, performance-enhancement has to be monitored and calibrated when things get out of whack. Adjustments and provisions need to be made when enhancement causes undue harm to an athlete (human or otherwise) or when it alters the nature of the sport in a regressive way (which can often be a very personal and philosophic opinion).

Ultimately, enhancement cannot happen inside a vacuum. We have to understand and accept the fact that it's going to change things -- often in non-subtle and unpredictable ways.

The goal shouldn't be to eliminate enhancement, but to help athletes perform at their highest level possible, and to see sports brought to their ultimate potential.
Posted by George at 5/20/2008

In 20 years we will see the full extent of the health problems that steroid use will cause in these athletes.

They just need to do with horses exactly what they do with motor vehicles in sports. They need to regulate exactly what they can and can't ride, right down to the genomic level. Oh, and give as much acknowledgment to the pharmacologists and geneticists as motor racing teams give to their pit crews.

This might also be applicable to sports like baseball - regulate exactly what sort of body you can use to play.