Grinspoon: Who Speaks for Earth?

There's a provocative new article by David Grinspoon, author of Lonely Planets, about the METI debate in SEED Magazine:

After decades of searching, scientists have found no trace of extraterrestrial intelligence. Now, some of them hope to make contact by broadcasting messages to the stars. Are we prepared for an answer? 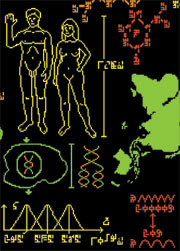 Zaitsev has already sent several powerful messages to nearby, sun-like stars—a practice called "Active SETI." But some scientists feel that he's not only acting out of turn, but also independently speaking for everyone on the entire planet. Moreover, they believe there are possible dangers we may unleash by announcing ourselves to the unknown darkness, and if anyone plans to transmit messages from Earth, they want the rest of the world to be involved. For years the debate over Active SETI versus passive "listening" has mostly been confined to SETI insiders. But late last year the controversy boiled over into public view after the journal Nature published an editorial scolding the SETI community for failing to conduct an open discussion on the remote, but real, risks of unregulated signals to the stars. And in September, two major figures resigned from an elite SETI study group in protest. All this despite the fact that SETI's ongoing quest has so far been largely fruitless. For Active SETI's critics, the potential for alerting dangerous or malevolent entities to our presence is enough to justify their concern.

Interesting quote by Michael Michaud, a former top diplomat within the US State Department and a specialist in technology policy: "Active SETI is not science; it's diplomacy. My personal goal is not to stop all transmissions, but to get the discussion out of a small group of elites."

Sounds like Michaud is right about that being diplomacy rather than science.

Fortunately it represents no threat for two major reasons that I can see:

1) There are no alien civilizations that are close enough to be of any concern.

2) As far as I know we've been sending out signals non-stop in all directions since the invention of radio. So even if there were aliens, we are already completely exposed.

Its annoying that people would presume to speak for humanity without having been granted any official authority to do so. But its harmless. I figure just let the dying breed of alien believers/worshipers go about their rituals in peace.

Please take into account that I did not read David Grinspoon's article “Who Speaks for Earth?” as a reviewer -- I saw this article when it was already published.

If David Grinspoon gave me an opportunity to read his article before publication, I should underline that: