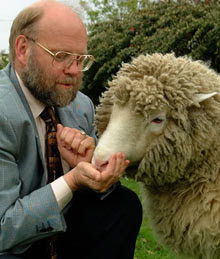 Technology Review talks to biologist Ian Wilmut about his cloning plans for the future:

Research mixing human and animal eggs and sperm has garnered considerable ethical concern and been banned in several countries. The banning was started in part by fears that scientists will create animals with human genes or other ethically questionable organisms, and in part by concerns that mixing animal and human materials diminishes the sanctity of human life. But researchers say that public outcry has largely failed to distinguish between important medical research, such as therapeutic cloning, and more dubious experiments. For example, in the United Kingdom, proposals to use animal eggs for human cloning sparked outcry from an overzealous media portending half-human creatures.

Last month, after a lengthy debate, the U.K. authority overseeing such research overrode a previous ban, approving specific projects to generate these cells. Much like other embryonic stem-cell research, the embryos the scientists generate--dubbed cybrids rather than hybrids because only the cell cytoplasm from the animal is used--are not allowed to develop beyond 14 days.

Ian Wilmut, the biologist who spearheaded the cloning of the now renowned Dolly the sheep, plans to submit his own proposal for cybrid research in the next few months. Wilmut, now director of the Scottish Center for Regenerative Medicine at the University of Edinburgh, ultimately wants to use stem cells cloned from a patient with ALS, a degenerative movement disorder, to develop a model for studying the disease.