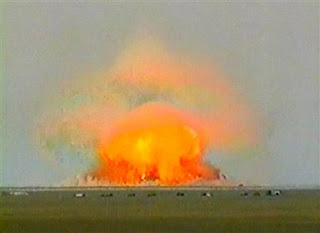 Russia has tested the world's most powerful vacuum bomb, which unleashes a destructive shockwave with the power of a nuclear blast, the military said on Tuesday, dubbing it the "father of all bombs".

The bomb is the latest in a series of new Russian weapons and policy moves as President Vladimir Putin tries to reassert Moscow's role on the international stage.

"You will now see it in action, the bomb which has no match in the world is being tested at a military site."

It showed a Tupolev Tu-160 strategic bomber dropping the bomb over a testing ground. A large explosion followed.

Pictures showed what looked like a flattened multi-storey block of flats surrounded by scorched soil and boulders. "The soil looks like a lunar landscape," the report said.

This appears to be a response to the USA's 'Mother Of All Bombs,' which was the previous record holder for most powerful non-nuclear weapon.

This 'vacuum bomb' is also known as a thermobaric weapon (also called high-impulse thermobaric weapons (HITs) or fuel-air explosives (FAE or FAX)). According to the Wikipedia article, these bombs differ from conventional explosive weapons in that they use atmospheric oxygen instead of an oxidizer in their explosives. They produce more explosive energy for a given size than do other conventional explosives, but have the downside of being less predictable in their effect.

In regards to this bomb's effect (from Wikipedia):

There are dramatic differences between explosions involving high explosives and vapor clouds at close distances. For the same amount of energy, the high explosive blast overpressure is much higher and the blast impulse is much lower than that from a vapor cloud explosion. The shock wave from a TNT explosion is of relatively short duration, while the blast wave produced by an explosion of hydrocarbon material displays a relatively long duration. The duration of the positive phase of a shock wave is an important parameter in the response of structures to a blast.

The effects produced by FAEs (a long-duration high pressure and heat impulse) are often likened to the effects produced by low-yield nuclear weapons, but without the problems of radiation. However, this is inexact; for all current and foreseen sub-kiloton-yield nuclear weapon designs, prompt radiation effects predominate, producing some secondary heating; very little of the nominal yield is actually delivered as blast. The significant injury dealt by either weapon on a targeted population is nonetheless great.

Some fuels used, such as ethylene oxide and propylene oxide, act like mustards. A device using such fuels can be dangerous if the fuel fails to completely ignite; the device is at risk of producing the effects of a chemical weapon.

Btw: I had found the secret sauce to the improved power to weight ratio of the Russian bomb.

From 2005:
Researchers can greatly increase the power of weapons by adding materials known as superthermites that combine nanometals such as nanoaluminum with metal oxides such as iron oxide, according to Steven Son, a project leader in the Explosives Science and Technology group at Los Alamos.

Militarily these weapons are not game changers, they are just interesting technically.

Large conventional bombs do not receive nearly the condemnation of very small nuclear bombs. Even without fallout and radioactive contamination of the bomb site, the western public is unlikely to accept the use of small nuclear weapons unless the media preps them to accept it.

Whatever Russia has and is developing will belong to the Islamic Republic of Russia within the lifetime of some readers here, if Aubrey de Grey and his cohorts are successful.