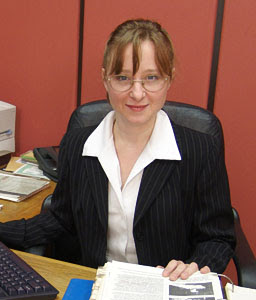 It’s funny how these things go. There I was at the TransVision 2007 celebrity reception last Thursday, drinking white wine, munching on hors d’oeuvres and eagerly awaiting the arrival of William Shatner. I was looking forward to a once in a lifetime opportunity.

And then I realized that I was in the company of Tanya Jones, chief operating officer for Alcor. I had never met Tanya before and I have yet to visit their facility in Arizona. I was very impressed with her TV07 presentation from earlier in the week and I was bursting with questions.

So, as we were waiting for Shatner to arrive, we began to chat.

To freeze and protect

During her talk two days prior, Tanya gave conference attendees the rundown on some of Alcor's more recent work and initiatives. It was a fascinating glimpse into the world of cryonics and what it takes to run a company on the technological and social fringe.

She noted how Alcor teams can be rushed to the bedside of dying patients as they ready for the suffusion of cryoprotectants in preparation for freezing. Without this highly engineered liquid, preservation would be completely disastrous with each cell suffering a host of problems, including ice crystallization and the eventual threat of it losing all its physical integrity upon reanimation. The cryoprotectant gel, which replaces the blood after death, essentially converts the body into a glass-like state upon contact with liquid nitrogen. The body’s informational state is thus retained at the highest level currently possible.

Consequently, getting the patient into cold storage quickly is paramount. As Tanya noted during her presentation, “time is trauma.” During the cocktail reception I asked her how long would be too long. She replied that any kind of delay is detrimental, but that after 24 hours the real serious and irrevocable damage starts to occur, namely cellular degradation and host of other neural problems as the brain begins to lose its cohesion and organization.

I asked her if Alcor has a policy for refusing the receipt of severely damaged corpses, say a body that had been terribly damaged by autopsy or by a motor vehicle accident. She answered that in such cases, where information theoretic death is all but assured, it is not up to Alcor but rather the predetermined wishes of the deceased. When an individual signs up with Alcor they specify the various extremes to which they will still agree to be cryonically preserved. Alcor unquestioningly adheres to the wishes of the patient.

Tanya also described the freezing process which is done under strictly controlled conditions. The body is slowly brought down to the optimally low temperature and is carefully monitored for fracturing. Quite frustratingly, every preservation that has ever been conducted at Alcor has suffered from fracturing of some sort. Tanya described the sound as ice-cubes popping in a drink.

I squirmed in my seat listening to this description, wondering how our high tech descendants will repair this sort of “information theoretic” brain damage.

I was impressed with Tanya’s honesty and I told her so. By being open about current limitations, they come across as being less interested in the “sell” aspect and more concerned with creating a credible and legitimate industry. Along these lines I asked Tanya about regulation and whether or not she believes there will ever be such a thing as a monitored cryonics industry.

Not only did Tanya whole heartedly agree, she is convinced that it is inevitable and that a big battle is looming. “But Alcor,” claimed Tanya, “is ready.” She quickly outlined her plans and strategy for what she thinks will be a long and drawn out struggle to get the kind of regulation in place that would be to the benefit of Alcor and the burgeoning industry of cryonics – a battle that she believes will come sooner rather than later. As it currently stands, Alcor is 'regulated' under the Anatomical Gift Act, which makes Alcor a kind of glorified research lab and organ storage facility. Which I suppose is better than being acknowledged as a funeral parlor. 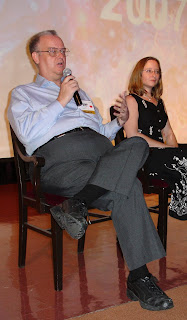 It’s this lack of recognition and backwards thinking that has arguably landed Alcor in trouble. The scandalous Ted Williams affair, which Tanya claims is finally all over and done with (including cash in hand), is an example of how a new and unrecognized industry can face undue challenges and public scrutiny. More formal and cogent regulation will not only give Alcor needed credibility as they work to create a viable business, it will also result in a safer and more effective industry.

From grave to cradle
Interestingly, while Alcor is primarily concerned with preservation, they are also looking ahead to a time when reanimation will finally become possible. They project themselves as being an all-in-one facility. Today they freeze bodies; tomorrow they hope to be the company that brings the dead back to life.

To this end they are creating a research lab in which rats will be cryonically preserved and experimented upon. This approach makes perfect sense. It will allow them to not just look ahead, but to gauge the effectiveness of current preservation procedures and technologies.

Jokingly, I complained to Tanya about their use of rats. “The thought of a little cryonics lab filled with frozen rats in tiny dewars is unsettling," I said, "Who wants to see a reanimated rat running around? Why couldn’t you guys have used cute little bunny rabbits instead – it would be much better PR to see a bunch of revived bunny rabbits hopping around.” Tanya laughed and noted how animal experimentation will in fact escalate and eventually come to involve more complex organisms such as pigs.

Cool company
I have yet to sign up for cryonics. My reasons are, admittedly, personal, complicated and even non-nonsensical. There may come a day, however, when I've reconciled my broader existential outlook with the prospect of cryonics.

Until then, however, I will laud the efforts of Alcor and continue to advocate for the right to a long life. They are certainly blazing a fascinating trail into the future.

Oh, and I totally missed the opportunity to meet William Shatner. I barely even noticed that he was in the room when I was chatting with Tanya.

Now why do you suppose I have absolutely no regrets about that?
Posted by George at 7/29/2007

I have yet to sign up for cryonics. My reasons are, admittedly, personal, complicated and even non-nonsensical.


I'd love to see a full post from you expounding on this. That is, if you haven't already done so here or elsewhere that i missed.