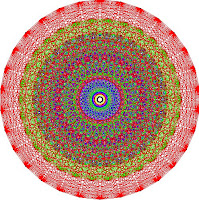 It's been said -- somewhat infamously -- that science is all but finished. The claim is that all the great scientific breakthroughs have already been made and now it's just a matter of dotting the i's and crossing the t's. Worse, others have speculated that we puny humans, due to our limited cognitive capacities, cannot advance our science much further; we simply lack the wiring to comprehend truly advanced concepts [Brian Greene has used the analogy that you can't teach physics to a dog].

I'm not sure I buy into either assertion. There is still plenty of terra incognita for us to discover. Moreover, because our technologies are steadily advancing, we will have new tools that will help us to better see and understand our Universe.

Take supercomputers, for example. These number crunching monsters can process horrific amounts of data and reveal aspects of our world that were previously invisible to us.

Such a discovery was recently made by mathematicians who successfully mapped a 248-dimensional structure. Called a Lie group E8, it took a team of 19 mathematicians four years to develop. They produced almost 100 times more data than the Human Genome Project. There are 205,263,363,600 entries on the matrix, many of them vastly more complicated than a straightforward number; some are complex equations. If all the numbers were written out in small type, they would cover an area the size of Manhattan.

None of this would have been possible without supercomputers. The basic idea was conceived over 120 years ago by Norwegian math genius Sophus Lie -- but he didn't have a Sage supercomputer. It wasn't until now that such a process could be executed.

Why is this a big deal?

Because mathematicians have mapped out the most complex abstract structure ever conceived -- a structure that could conceivably help with work in string theory and provide a clue in the struggle for unification.

According to the standard model, all particles and forces can be represented by Lie groups. Consequently, their study has become an integral tool for understanding the laws of nature.

As computers get more and more powerful, one can reasonably assume that they will continue to act as assistive devices and help us better conceptualize and comprehend concepts, patterns and phenomenon beyond the limits of our biological minds. Many things exist which we as yet cannot see.

As Carl Sagan once said, "Somewhere, something incredible is waiting to be known."
Posted by George at 5/14/2007

Cool image! Also relevant is one of my favorite quotes, by Eden Phillpotts:

"The universe is full of magical things, patiently waiting for our wits to grow sharper."

"but he didn't have a Sage supercomputer"
Actually, the computation wasn't carried out on a supercomputer but on a machine with 8 Opteron cores and 64GB of RAM. It is called sAGE supercomputer all over the web because it is the main development machine for SAGE -- a free computer algebra system. If you are curious, the URL is: www.sagemath.org.