Chris Burden took performance art to unprecedented extremes during the 1970s. During his performances he would often put himself directly in harm's way; the point of his art, in addition to making political and social statements, was to illicit discomfort in the audience/observers.

His first performance was Five Day Locker Piece (1971). He spent 5 days locked in a two-foot by two-foot locker. Immeidately above Burden was a 5-gallon supply of water, while the locker below him contained an empty 5-gallon jug. He remained crammed in this space for the entire 5 days without food.

His best-known performance, called Shoot, came a year later when he had a friend shoot him with a .22 rifle from a distance of 5 meters. Burden wanted the bullet to graze his bicep, but he flinched when the rifle went off and the bullet went right into his arm. Interpretations of Shoot often relate the piece to the Vietnam war, the political assassinations of the 1960s, and the frightening realization that anyone could be shot at any time -- and most likely by a familiar person. 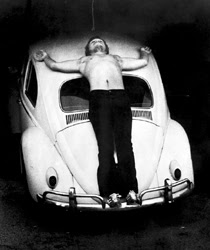 In 1974 Burden performed Transfixed in which his body was stretched along the roof of a Volkswagen Bug while a friend drove spikes through his hands nailing him to the car. The vehicle was then driven out into the street where it obstructed traffic. Aside from the strange religious connotations of this piece, the point of Transfixed might have been merely to shock and disturb.

But is it art?

In a word, yes. The fact that the artist makes the claim that it is art and that there are observers who experience the performance are criteria enough -- never mind the fact that these pieces evoke extreme reactions in the audience.

But is it ART?...NOT according to the Randians, see Louis Torres and Michelle Marder Kamhi, *What Art Is: The Esthetic Theory of Ayn Rand*. This is actually a pretty darn good book, and a superb discussion of esthetic theory.

However, having pointed that out, one could say that Burden's stuff is art of a sort, just not very good. But one could also say that not only is it art (of a sort) but that it is fairly good in terms of what its artist (Burden) intends to accomplish in terms of his viewers.

Thanks for your blog work(s), George!

lol,,,,,,,, i was the kid that came and talked at chris every day while he did the 5 day locker piece