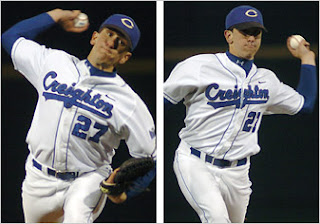 I often wonder where human enhancement will take professional sports. Sure, we're in the denial-and-react phase of this transformation (as witnessed by the strict laws against chemical enhancement), but the time is coming when the genetically enhanced athlete will be the norm.

Pat Venditte is a good example of what the future might hold. He's not genetically or chemically enhanced; Venditte is a naturally born ambidextrous switch pitcher who plays for Creighton University in the NCAA. He can switch from being a right or left handed pitcher at a moment's notice. This is advantageous for the same reason that switch hitters alter their batting stances (a skill that does not require ambidexterity, also known as cross-dominance).

I can see cross-dominance being an accepted feature of the enhanced human. Maintaining physical asymmetry doesn't make a lot of sense -- handedness is a throwback to our evolutionary history and most likely has a genetic basis (although the exact reason for handedness is still an unsolved mystery in biology).

At the same time, the advantages of being ambidextrous are self-evident and numerous. Jimi Hendrix, for example, was ambidextrous and he had perfect pitch (talk about winning the genetic lottery!!). Some good examples of cross-dominance in sports can be found here.

Including the ability to throw a curve that lands low and inside against a tough left-handed hitter.
Posted by George at 4/06/2007