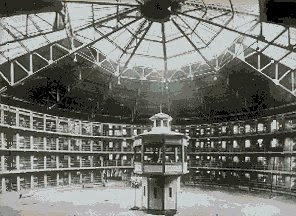 The recent upswell of interest in Facebook and other social networking sites has taken us one step closer to the all-knowing and all-seeing social panopticon.

Like everyone else (it seems), I'm on Facebook now and enjoying it tremendously. As Simon Smith recently noted, it has a killer UI and is far, far too much fun to use. Users can provide an endless barrage of information about themselves which in turn appears instantly on their friends' news feeds.

You are now tuned into the George News Network: All George, all the time:

George has joined a new group.

George has been tagged in a new photo.

George has edited his relationship status and religious affiliation.

George is brushing his teeth.

George should probably be using his time more productively....

Exciting stuff, to be sure. You're watching me and I'm watching you. It's a thrill a minute.

Personally, I'm getting to the point now where after I successfully add a new friend I can actually feel the release of dopamine in my brain. Mmmm, new friend.....that's the good stuff....

In addition to all the masturbatory self-affirmation that goes on in Facebook, however, there are some broader social issues to consider. I'm speaking specifically of the rapidly evaporating phenomenon of anonymity. You remember 'anonymity?' There was a time not too long ago when barely anyone knew who you were outside of your family and immediate group of friends.

Today, social networking sites allow users to post as much information about themselves as they want -- everything from who they're currently dating to their favorite book. This could eventually come back to haunt them on account of unscrupulous individuals or Big Brother.

Take, for example, the ability to tag photos; if your image is on the Web, chances are your visual anonymity has been lost forever. Facebook lets you upload images, drag a square cursor around your friend's face, and with a click of the mouse tie that person's image to his or her profile. Eventually, given one's visual prominence on the Web, these sites will use photo recognition software to automatically tag a photo with your name. In fact, Google is already using this technology on Picasa.

But when taking the Facebook phenomenon into consideration, and seeing how unabashed people are about sharing their personal information, this appears to be a non-issue. At least at this point in time anyway. Those who partake in social networking are a select group of individuals who, for the most part, don't care or don't realize that they're putting themselves 'out there.'

And I'm certainly a member of this group. I could avoid these sites and leak agonizingly little information about myself to the Web, or I can share the most trivial details of my life with others, form new friendships and connections, and have fun.

These things are all good, and help people to communicate. But I should also give a word of warning to the more enthusiastic facebookers eager to put their social lives online.

Remember that anything which you put online usually stays there, often for years and perhaps even indefinitely. This data can be used by anyone for any purpose. Any future employers, family members, boy/girlfriends, insurers, spouses or even CIA agents (if you're a tin foil hat wearing conspiracist) can Google you and perhaps discover more detail about your past social networking history than you might wish were disclosed.

So there's good reason to behave sensibly online. I don't think it happens at present but I expect that in the not too distant future insurance companies and perhaps even governments could begin mining this kind of online data in order to assess who is more or less likely to be a liability or a threat. Any comments made about your state of health could also potentially count against you in terms of employability or insurability.

The realm of science fiction is upon us.
So many good plot ideas- so much futurism coming true.