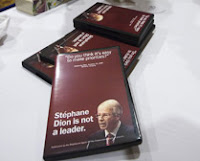 The minority Conservative government in Canada is launching a series of attack ads in which they slam the Liberals and their new leader, Stephane Dion. No, it's not election time in Canada; this is how the Conservatives do business. Knowing they're on thin ice, and failing to actually govern and implement effective policies, the government's primary concern has shifted to propaganda.

The ads suggest that Dion is a weak and unproven leader who would take Canada in the wrong direction. The ads also slam Dion and the previous Liberal government for their poor environmental track record. Yes, the previous government should be ashamed of their disregard for environmental issues, but this is really starting to be a tired tune.

It has been one year since the Conservatives took power and they have yet to unveil an environmental policy. They've used the year to do nothing more than attack the previous government. This tactic completely backfired on the Conservatives late last year at the UN's global warming conference in Nairobi, Kenya. Since that time, Prime Minister Steven Harper has relieved MP Rona Ambrose of her environment post and assigned John Baird to the position. Part of the motivation to do so is the Canadian public's growing concern with the environment. Baird has acted big and has admitted that global warming is happening, but that's been the extent of his work.

One year of lip service, empty gestures, and meaningless rhetoric. There is no Conservative environment policy and no vision.

But put together a series of attack ads, well, that they have the time and resources for. What an embarrassing and infuriating government we have here.
Posted by George at 1/28/2007

Saw these this morning on CityTV and punted a note to Harper enquiring about the Emperor's wardrobe. Suggests an election call is in the air. ISTR that Canadians don't respod well to this sort of personal attack, so I fervently hope it backfires on them big-time.