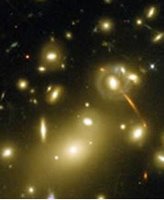 Earlier this year cosmologist Stephen Hawking and his colleague Thomas Hertog of the European Laboratory for Particle Physics at CERN in Geneva, Switzerland, published a paper claiming that the Universe has no singular or unique beginning. Rather, it began in just about every way imaginable.

The vast majority of these proposed universes disappeared without a trace; only a minuscule fraction of them blended to make the current Universe. Hawking and Hertog insist that if we are to take quantum physics seriously, we must conclude that there is no single history. We should picture the Universe in the first instants of the Big Bang, they say, as a superposition of all cosmological possibilities.

He and Hawking call their theory 'top-down' cosmology, because instead of looking for some fundamental set of initial physical laws under which our Universe unfolded, it starts 'at the top', with what we see today, and works backwards to see what the initial set of possibilities might have been. In effect, says Hertog, the present 'selects' the past.

Within just a few seconds after the Big Bang, a single history had already come to dominate the Universe, he explains. So from the 'classical' viewpoint of big objects such as stars and galaxies, things happened only one way after that point. Other 'histories', say, one in which the Earth formed only 4,000 years ago, have made no significant contribution to this cosmic evolution.

But in the first instants of the Big Bang, there existed a superposition of ever more different versions of the Universe, instead of a unique history. And most crucially, Hertog says that "our current Universe has features frozen in from this early quantum mixture".

In other words, some of these alternative histories have left their imprint behind. This is why Hertog and Hawking insist that their 'top-down' cosmology is testable. Hertog says that the theory predicts the pattern of the variations in intensity of microwave background radiation, the afterglow of the Big Bang now imprinted on the sky, which reveal fluctuations in the fireball of the nascent Universe. These variations are minute, but space-based detectors have measured them ever more accurately over the past several years.

What's fascinating about this theory is that, by extension, it may be transferable to individual observers. By applying a stronger variant of the anthropic principle, one could argue that the cosmos has structured itself around your very own existence.

Controversial, to be sure!

A mathematical why of the Big Bang
Outline

Let Ui be a set of locations of particles of the universe.
U1xU2x ...... xUix ..... a set of infinite paths
(Cartesian product of sets of urelements).
this set is equal to the void set by the
negation of the axiom of choice.

So there is no more space containing the particles.
The particles collapse on themselves: Big Crunch.
Then Big Bang.

The Big Bang has taken place thus the negation of the axiom
of choice is likely to be considered as a good axiom.
Adib Ben Jebara.

At the level of elementary particles, time could be stopped

As a result of what could be happening at the level of
elementary particles, there might be disturbances of
time in an area, at our level, like slowing down.