Congratulations to me for being Time's person of the year 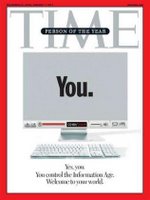 A couple of weeks ago Time Magazine announced its 'Person of the Year' for 2006. Much to everyone's surprise, they awarded you as person of the year. Yes, you. And me. And anyone else who contributed to the ever growing Internet based infosphere.

If I assessed the reaction to this announcement correctly, most people thought this was the silliest idea they'd ever heard. The vast majority of opinions that I encountered came down hard on Time for this decision. Personally, I think most people missed the boat on this one.

You may not feel that you deserve this award, but I certainly do. I worked freakin' hard all year producing content for which I did not receive one single penny. I produced hundreds of original blog entries, created over a dozen podcasts, uploaded a number of pictures to Flickr, edited Wikipedia entries, uploaded some videos to YouTube, added comments to innumerable posts, Dugg user-posted articles, and much, much more.

Moreover, I'm contributing to the ever increasing diversification of media and alternative reporting. I don't have to answer to anyone except myself. All my content comes from me and is not driven by typical Big Media agendas and conventions. Self-published content for all the world to see is a monumental victory for freedom of speech -- a fact that Time, a magazine under threat from this type of content, is undoubtedly aware of.

Similarly, user-driven content is beginning to take on political influence. Sure, the macaca fiasco was small potatoes, but now politicians know The People are watching their every (often idiotic) moves. Sousveillance and the participatory panopticon are beginning to take shape.

More conceptually, like the democratization of media, the power of the masses are beginning to trump the power of the charismatic individual (whether these individual contributions are positive or negative). It's becoming increasingly difficult in the globalized and democratic digital age to award one single person as being the year's most influential. This is a good thing.

So, yes, I feel that we all deserve to be awarded as persons of the year. Kudos to Time Magazine!
Posted by George at 12/31/2006

"The greatest generosity is non-attachment." (Atisha) Thanks for all your contributions.