Kramnik and the machine 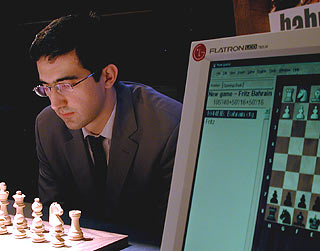 The best chess player who is made out of meat is set to compete against Deep Fritz in a 6-game tournament starting Saturday November 25 in Bonn, Germany. Vladimir Kramnik, the reigning classical chess champion, is poised to win one million US dollars should he win.

The 30-year old Kramnik, like his computer playing predecessor Garry Kasparov, is taking the event very seriously -- and not just from the perspective of wanting the money or being a tough competitor. He notes that,

"Fritz examines millions of moves per second. It is extraordinarily difficult to play against such a calculating monster. Right from the start you are walking on a very narrow ridge, and you know that any inattentiveness will be your downfall. It is a scientific experiment and I will have to fight very hard for my chance."

Kramnik believes that, should he win, it may mark the last time a human defeats a premier chess playing machine.

Indeed, it has been nearly 10 years since Deep Blue defeated Kasparov. Chess playing computers, needless to say, have been steadily refined since then. As it stands, the elite grandmasters are now at best able to draw these number crunching behemoths. Kramnik achieved a draw against Deep Fritz in Bahrain in 2002, and Kasparov tied Deep Junior in New York a year later.

This match follows on the heels of Kramnik's controversial victory over Veselin topalov at the 2006 FIDE World Chess Championships.

I'll be blogging more about the Kramnik-Fritz tournament as it progresses. If you would like to challenge me to a game, I'm sentdev at Gameknot.
Posted by George at 11/17/2006