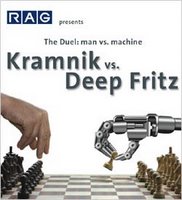 Vladimir Kramnik had to play tough against Deep Fritz today to salvage a draw. Fritz, despite playing black and being down a pawn for most of the game, pushed hard and controlled much of the play. Kramnik, who opened with Catalan again, was able to hold off the machine after 44 moves. This was made all the more impressive by the fact that Kramnik exchanged a rook for a bishop late in the game. The match was theoretically drawn soon after that.

Kramnik plays for the draw every time he enters into a match with Fritz -- even when he plays white. Several times during the game he offered Fritz an exchange of equal pieces, which Fritz brazenly refused, opting instead to keep pushing for the win. My thinking on the matter is that Fritz calculated a draw as worst case scenario at these junctures and could still sniff a winning position should Kramnik make some mis-plays.

Fritz assumed its own perfect play and calculated either the probability of a loss as very minimal or even nil. Must be nice.
Posted by George at 11/29/2006