As liberal society progressively moves in the direction of increased secularization, one would think that it would be easier to critique religions, including the promotion of material that might be considered offensive. This hasn’t been the case. In the past, as today, seriously scathing agitprop and art were considered by many to be sacrilegious (remember Piss Christ and Ecce Homo?) and anti-social. But these days, there’s the added fear of backlash and violence (witness the recent Idomeneo show cancellation in Germany).

Fear is starting to settle in.

This said, I suppose I should have seen this one coming: Slayer's latest CD, 'Christ Illusion,' has been banned in India because it is considered "offensive and in very bad taste."

Specifically, the album cover depicts a mutilated Jesus Christ, while the songs are overtly anti-religious. Song titles include "Skeleton Christ" and "Jihad." EMI India has banned and destroyed all existing copies, fearing that both Christians and Muslims would be offended (destroying the copies seems a bit excessive, but that's just me).

I blogged about this album when it was released back in August.

A censored version of the album cover has been produced, but EMI India has not indicated that they will be re-releasing the CD any time soon. It appears to me that they are doing this to avoid a potential row similar to the one created by the controversial Danish cartoons from earlier this year.

Mark this as another victory for anti-secular forces and a blow against free speech. By this action, EMI India is caving to the pressure of religious groups, particularly the extremists. 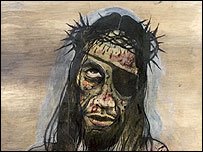 That's right, folks -- keep on pandering. Keep on giving inches. Keep on promoting the idea that anti-religious polemics are unacceptable and potentially "offensive." Keep cowering in the face of threats. Worry about offending the religious. Keep on giving them a sense of entitlement and legitimacy. And at the same time let's admit to having an inferiority complex and let's admit that we're scared shitless of religious groups and what they might do when they find some material "offensive and in very bad taste." Let's completely forgo the liberal mission to separate church from state and to protect people from the forces of evangelical religion.

And let's see where this all gets us.

Deservedly, Slayer gets to have the last word; "Jihad" is sung from the perspective of a religious extremist:

I will watch you die again for him

Be optimistic, happy and calm
Show no fear or anxiety
Smile at the face of God
And your reward will be eternity
Holy warriors
Your patience will be justified
Everything is for him
You must not comfort the animal before you kill it
Strike as champions at the heart of the nonbelievers
Strike above the neck and at all extremities
For it's a point of no return for almighty God
God will give victory to his faithful servant
When you reach ground zero you will have killed the enemy
The great Satan!

Haha all I can do anymore is just laugh. It's like they're living in 1906.

People in these countries are so dumb. since metal started who the hell thought its satanic, where is it satanic. on the cover its about how gods not really one to worship because what good has come. the christians started WWII, the slave trade, the lot. notice how a lot of asain/black people are christian now.