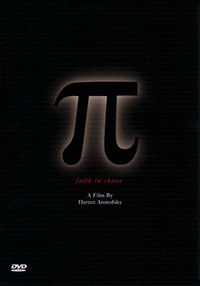 I finally got around to seeing Darren Aronofsky’s excellent metaphysical sci-fi flick, π (or "Pi"). Shot in grainy and over-exposed black-and-white, it’s the story of a brilliant mathematician, Max Cohen (played by Sean Gullette) who is driven by his conviction that higher math can be used to unlock secrets of the natural world. Using stock market figures as his data set, he tries to uncover patterns with the assistance of his homemade retrofuturist supercomputer, Euclid.

It is an eerie, noir and pessimistic film that addresses genius and how it can bring about irrational behaviour and even psychotic obsession. To a lesser degree it is about the fine line that divides science from pseudoscience, exploring such topics as platonic realism, numerology, religion and naturalism. Aronofsky doesn’t beat the audience over the head with any kind of grand judgment on the matter, leaving the viewers to decide for themselves.

Max’s story starts when he is six years old. Where Icarus flew too close to the sun, Max stared at it for too long and nearly blinded himself. He eventually regained his sight, but he also developed recurring headaches, and quite possibly his propensity for higher mathematics. This incident is later mirrored when Max cannot pull himself away from his mathematical obsession, one that is met with disastrous consequences.

His conviction that numbers and patterns can unlock the mysteries of the Universe parallels those of Ralph Nelson Elliott who studied the stock market back in the 1920's. Elliot developed the Elliot Wave Principle (EWP) that could, to a certain extent, predict broad trends in the stock market. In 1946 Elliot published his final major work, Nature's Law, in which he stated that the EWP was "the secret of the universe," and that "because man is subject to rhythmical procedure, calculations having to do with his activities can be projected far into the future with a justification and certainty heretofore unattainable." This is somewhat reminiscent of Leonardo DaVinci's Vitruvian Man in which he sought to show that geometric and mathematical consistencies could be found in the human form.

The EWP is used to this day, and utilizes such mathematical principles as fractal geometry, Fibonacci sequences, and the Golden Ratio. These metaphysical curiosities are where Max’s obsessions are drawn from, and to which Max is hopelessly drawn.

Max’s genius causes him to see patterns in virtually everything. He even creates personal dictums about it. The fundamental assumptions that drive him are:

1. Mathematics is the language of nature
2. Everything can be represented and understood by numbers
3. If you graph the numbers of any system, patterns emerge

But due to his ability to see patterns in everything, and because he believes he can uncover deeper existential truths by analyzing sets, he ventures dangerously close to the realms of pseudomathematics – a journey that parallels his journey from sanity to insanity, rationality to irrationality. He becomes involved with a Hasidic cabalistic sect who is searching for the word of God in a code of 216 numbers. He becomes progressively obsessed and overly sure of himself. His paranoia and anti-social proclivities intensify as he feels himself getting close to some kind of revealing truth. At one point, his mentor, Sol Robeson (played by Mark Margolis), warns him that his rejection of scientific vigor has made him nothing less than a numerologist. Interestingly, Sol, whose name means "sun," abandoned a similar journey when trying to find some kind of code in the string of π.

Max's journey reminded me of the film portrayal of John Nash in the film, "A Beautiful Mind." Nash, a mathematical genius and cryptologist, suffered from schizophrenia and paranoia. Like Max, Nash could see patterns in nature; there's the apocryphal scene in the film where Nash sees arrangements in the configuration of the stars.

The theme of genius and mental illness is one that fascinates me. Some of the greatest human minds were plagued by serious psychological disorders. Kurt Gödel, for example, suffered terribly from paranoia. And mathematician Georg Cantor likely suffered from bi-polar disorder. There are many other examples, particularly among artistic geniuses.

Interestingly, the film also dealt with the issue of limits to human intelligence. Max, despite his abilities, is dependent on his computer to crunch the numbers. During one scene he sets the parameters on Euclid to process what may be the Ultimate Answer. Max procrastinates for what seems an eternity before he executes the command. He spirals around the room like the Golden Ratio before he has the courage to hit the enter button.

This is reflective of the work of modern mathematicians. A number of scientists are already using advanced computers to perform work they would otherwise be unable to accomplish. Mathematician Steven Strogatz, speculating on what the future holds for research on complex systems, notes that "we may end up as bystanders, unable to follow along with the machines we've built, flabbergasted by their startling conclusions."

In π, however, it is Max's genius that is his final undoing, and he knows it. In the climatic moment of the movie he abandons his wild goose chase the only way he can: by trepanning himself with a drill. He has to bore out his mathematical gift which is screaming in his ears like a wailing siren.

In the final scene he sits on a park bench and looks up at the sky, but instead of seeing patterns, he sees clouds.

This is a damning conclusion when one contrasts Max’s journey with that of humanity’s. Like Max, human civilization has been endowed with a collective genius that it is using to uncover the hidden truths of the Universe and existence. Is Aronofsky suggesting that humanity’s journey of self-discovery will only result in madness and despair? Will we, like Max and Icarus, journey too close to the sun? Is our only recourse to abandon our search? Or is the madness in putting the drill to our collective skulls? Aronofsky may be suggesting that the human condition is untenable.

π is a wonderful existential movie that had enough intellectual and philosophical material to keep me interested. The acting and screenplay was amateurish at times, indicative of director Aronofsky's lack of experience. It was his first film (at the age of 29) and made on a $60,000 budget.

Stylistically, however, it was excellent. I loved the grainy black-and-white, the quick-cuts, and the exaggerated use of contrast that added to the feelings of paranoia and claustrophobia. The film's score was coloured with electronica, a genre that is no stranger to the application of mathematics and patterns.

Definitely a film worth seeing. And it won't be much longer before we can watch Aronofsky's upcoming film, The Fountain which deals with the issue of immortality.
Posted by George at 10/28/2006

Pi was ok as a film, but it does rather perpetuate the idea of geniuses being either mad or bad (or both). I also thought the ending was dissapointing.

I liked the old professor character with his Go playing and fishtank, and the hint of an AI hard takeoff.

There are very few movies made with a mathematical theme, and I've yet to see one where the maths character is not psychologically trumatised/damaged in some way. Personally I'd like to see a few more positive portrayals.