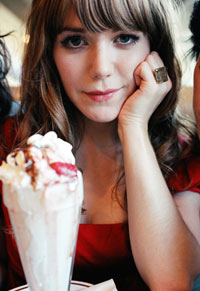 I'm a fan of American alt-rockers Rilo Kiley, so I was eager to hear Jenny Lewis's new solo effort, Rabbit Fur Coat. Jenny writes some pretty interesting lyrics, often cynical, witty and dark. You know, the kind of adult alternative stuff you grow to appreciate when you become a thirtysomething.

On her solo CD she does something quite unique. Lewis teamed up with The Watson Twins (supporting vocals) and recorded a gospel, folk and country flavoured album. What's interesting in all this is that the lyrics run somewhat contrary to what one would expect given these musical stylings; her religious cynicism provides an often ironic backdrop.

From me
From me

In "The Charging Sky," a song in which she bargains with God by taking up prayer as an insurance policy against her death, she sings:

In the desert beneath the charging sky
It’s only you and God
But what if God’s not there?
But His name is on your dollar bill
Which just became cab fare

And in "Rise Up With Fists," Lewis scathingly remarks,

It's hard to believe your prophets
When they're asking you to change things
But with their suspect lives we look the other way
Are you really that pure, Sir?
Thought I saw you in Vegas
It was not pretty, but she was

A self-described "terrible Jew," when asked why so many of her tracks addressed the topic of God, Lewis replied, "I didn't intend to write a bunch of songs about God. I was surprised when I had all of the songs completed and there were so many God references throughout. I guess that's what happens when you're about to turn 30... I think being broken-hearted is not the only thing you want to sing about."

I may be reading too much into Lewis's lyrics, but as she herself admits, she's at the part of her life where she needs to question the cosmos.