I went to a meditation class today that was organized by my yoga instructor. The yogi who conducted the class had over 30 years experience and studied for a while under the Maharishi Mahesh Yogi. My own meditation practice is drawn from the vipassana tradition, so I was unknowingly venturing into uncharted territory.

The yogi began by telling us a bit about himself, including his upbringing as a Roman Catholic (why are so many R.C. expats drawn to Eastern philosophies and religion?) and a short stint with a fringe Christian sect. He noted his disillusionment with the Vietnam War and how he came to discover Eastern philosophies, including Transcendental Meditation (TM). He also noted how one of his mentors could levitate about 6 inches off the ground – a claim that immediately got my back up and made me feel very uncomfortable.

The lesson given by the yogi was a bit more reasonable and grounded in the standard fare: life is a buzz of activity; the mind is conditioned to go, go, go; it’s difficult to quiet the mind; we are not our thoughts.

But there were some lessons I was unaccustomed to. The yogi noted how we need to find our true 'essence' or true 'self' -- which I’m not so sure is a view shared by Buddhists who contend that there is no definable self or true essence. He said we should strive to perceive our lives through the perspective of this true essence, which is like the vantage point of an observer who is a witness to our life. This, I think, is a bit more in tune with Buddhism, which suggests detachment from the ego (“In the world, but not of it”).

As for the meditation, it was quite unconventional – and the yogi admitted as much. He had us do relaxation exercises and meditation while lying down. Normally meditation is done in a sitting position, but I think the yogi was trying to make it easy for the beginners and to impart the lesson that if you quiet the body you quiet the mind. The relaxation exercises were nice, and I was able to relax my sore shoulders (which were tense from being in an alien environment with unfamiliar people).

Once the meditation started we focused on the breath – a practice that I’m very familiar with. But after a few minutes of that he had us move ‘beyond’ a focus on the breath to a focus on the pure mind. This I could not understand nor accomplish. In fact, the idea of zoning-out like this is anathema to my own notions as to why we meditate and how we work to improve the practice of mindfulness. It might be my ignorance, but it seemed “unmindful” to try to attain a state of uber-relaxed ‘pure mind.’ I don’t even know what that means.

Moreover, I think it’s impossible. The whole vipassana practice is based around the idea that the mind can never be truly quiet – it can only be tamed (which is a great analogy for life and the Dharma). And it’s through the practice of mindful meditation that we can acquire the concentration and the mental discipline to remain rooted in the present and go about the business of the Dharma. In a way, I saw this quasi-TM type of meditation as a form of escapism. 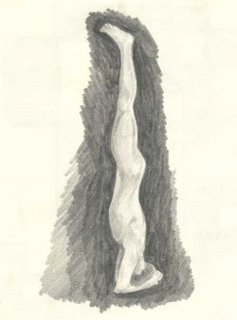 After the meditation I aksed the yogi if this was TM, which he said it wasn't. TM involves the use of a mantra that is repeated by the meditator. Yet despite this, I found it grating every time we were instructed to ‘transcend’ ourselves, our breath, or our thoughts – a word that was repeated far too many times for my liking. Perhaps its my Western upbringing, or my secular values, but I’m more interested in striving toward those things that are human attainable. And this is exactly what secular Buddhist Stephen Batchelor teaches. We run the risk of looking at the Buddha as some kind of demi-God or ‘transhuman’ as Batchelor puts it (not to be confused with the futurist transhuman). If we make this mistake, we undermine our own journey by failing to realize that Siddhartha was a regular schmuck just like you and me.

After the meditation I went to yoga class. I am really starting to make some progress. In addition to being able to hold poses for a bit longer and to stretch just a little bit further, I can now do an unassisted headstand. This is a huge deal for me; after the first time I did it I did a little dance around the room for joy.

Ah, there’s nothing like progress to keep you motivated.
Posted by George at 10/29/2006

A friend of mine writes:

"Levitation is only the tip of the iceberg of what TM people claim to be able to do. I've always been under the impression that TM is widely recognized as a cult.

A quick overview of the TM wikipedia article reveals that:
- they claim that they can levitate
- they're trying to start their own sovereign country
- they have created their own currency (i.e. they're printing money) in an effort to raise $10 trillion USD immediately
- they regularly make unsubstantiated scientific claims (like the "maharishi effect")
- they charge steep initiation fees ($2,500 according to wikipedia, but [it may now be] $25,000)

The question for me has always been whether the TM movement is merely misguided or whether it's actually ill-intentioned. Images of many millions of people gathering to watch Maharishi on a big platform high above the crowd--like on the cover of that book...with the teacher filling the entire right side looking like a cross between Michael Jackson and Jesus while the masses swarm below-- always make me very uncomfortable. But I never know for sure whether that might just be some subtle xenophobia on my part that prevents me from appreciating the cultural background of TM."