Vilenkin's Many Worlds in One 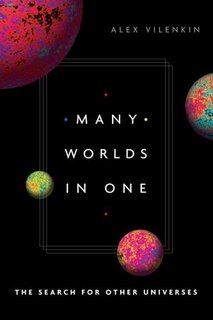 This book by Alexander Vilenkin looks interesting: Many Worlds in One: The Search for Other Universes. Check out this article of his at the Edge, "The Principle of Mediocrity."

From Publishers Weekly: Cosmologists ask many difficult questions and often come up with strange answers. In this engagingly written but difficult book, Vilenkin, a Tufts University physicist, does exactly this, discussing the creation of the universe, its likely demise and the growing belief among cosmologists that there are an infinite number of universes. Vilenkin does an impressive job of presenting the background information necessary for lay readers to understand the ideas behind the big bang and related phenomena. Having set the stage, the author then delves into cutting-edge ideas, many of his own devising. He argues persuasively that, thanks to repulsive gravity, the universe is likely to expand forever. He goes on to posit that our universe is but one of an infinite series, many of them populated by our "clones." Vilenkin is well aware of the implications of this assertion: "countless identical civilizations [to ours] are scattered in the infinite expanse of the cosmos. With humankind reduced to absolute cosmic insignificance, our descent from the center of the world is now complete." Drawing on the work of Stephen Hawking and recent advances in string theory, Vilenkin gives us a great deal to ponder.

From Booklist: Cosmology has moved from establishing that there was a finite start to the cosmos to theorizing about the initial conditions that kicked off the whole shebang. Vilenkin is a leading theorist whose scenarios about the enigma of the big bang emerge in this estimably clear, personable treatment. Vilenkin explains the idea of inflation, a phenomenal increase in the volume of space in the first infinitesimals of time, propounded by physicist Alan Guth (The Inflationary Universe, 1997). Inflation solved some theoretical problems but left others dangling, such as inducing inflation to stop; if it didn't, life could not have begun. Explaining that his solutions to the "graceful exit problem," as it is whimsically called, involve the concept of "eternal inflation," Vilenkin guides readers through its bizarre and head-spinning propositions. One is that our observed universe is embedded in a suprauniverse that infinitely spawns an infinite number of other universes. This and other gigantic ideas concisely presented will provoke the interest of readers intrigued by the origin of the big bang.
Posted by George at 9/28/2006