SETI and the human craving for uplift

I just finished reading a rather weak and unconvincing critique of SETI by Peter Schenkel over at the Skeptical Inquiry site. It contains the usual errors: an over emphasis on the Rare Earth Hypothesis, far too many sociological considerations that couldn’t possibly be exclusive to all intelligent life, and no thought given to the existential mode of postbiological intelligences (including the presence of megaprojects, both structural and computational).

Anyway, Schenkel made a comment that got me thinking about SETI and what contact means from the perspective of human desires. He noted that,

I would be the first one to react to such a contact event with great delight and satisfaction. The knowledge that we are not alone in the vast realm of the cosmos, and that it will be possible to establish a fruitful dialogue with other, possibly more advanced intelligent beings would mark the biggest event in human history. It would open the door to fantastic perspectives.

This is a sentiment that I believe is commonly shared among the contact optimists and those often think about the SETI endeavor. Contact, it is largely assumed, would have a paradigmatic effect on human civilization. Over the years I've heard these sorts of comments: Humans would be humbled and brought together in a state of pan-universal loving kindness. Religions and sectarianism would become irrelevant overnight. We would be able to acquire radically advanced technologies and transform our civilization and species. Humans would have the opportunity to adopt ETI values and social institutions that would undoubtedly be superior to our own.

In other words, we want to be uplifted. 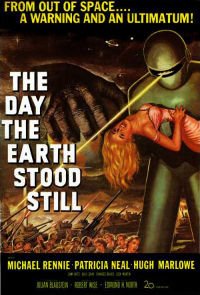 Science fiction has addressed this issue a number of times (of course). In the classic 50’s film The Day the Earth Stood Still, audiences, who were still shell-shocked from WWII and coming to grips with the presence of apocalyptic technologies, watched as extraterrestrials came down from the heavens and set things straight (talk about wish fulfillment). Essentially, ETI’s established a robotic police presence on Earth to keep potentially combative nation-states in line.

Similar themes are explored in ET: The Extra Terrestrial, Starman and K-PAX in which enlightened aliens exposed the backwardness and maliciousness of humanity. They may have not set us straight in these movies, but they caused us to be introspective at the very least.

And in David Brin’s Uplift series, an advanced species of extraterrestrials make it their business to traverse the Galaxy uplifting sentient creatures of all sorts, bringing them into a more advanced and dignified state of being. The same sort of thing is explored in Arthur C. Clarke’s 2001 in which an advanced intelligence instigates the rapid makeover of humanity as illustrated by David Bowman’s transformation into the Star Child.

Some socio-cultural groups have converted these sorts of ideas into religious-like expectations. The most prominent of these are the Raelians, who not only believe that human life was spawned by advanced ETI’s, but that they will eventually return to save humanity and bring eternal life. This is essentially a messianic-style religion that has taken root in the 21st century, and it reveals some very interesting aspects about human nature and religiosity as it manifests in culture. I could say more about UFOlogists, but perhaps I’ll save that rant for another post.

These examples, both science fictional and social, are representative of the human desire for both cultural and biological uplift. It’s generally assumed that because we can’t fix ourselves that ETI’s will do it for us. Moreover, with ETI’s and their radically advanced technology and enlightened natures, the potential for extreme existential transformation is non-trivial to say the least.

Or are humans the only exalted species who deserve this honor? If and when the ETI’s come, will we tell them to ignore nonhumans? I wonder how the ETI’s would react to that. Perhaps they’ll leave humans alone and uplift their dolphin friends just to spite us over our stupidity.

Thanks for all the fish, you speciesist morons!
Posted by George at 8/16/2006

The knowledge of ET intelligence would indeed be profound for me. As far as the desire for them to 'uplift' us with technology, I'm not so sure.

My personal dream for the human race is that we become a star-faring, galactic civilization on our own. If there are ETIs and other advanced civs in the galaxy, I'd MUCH prefer to meet them on equal or even advantageous terms.

When considering the idea of help from a more advanced civ, I like to keep in mind that their motives for doing so would be completely unknown. Even within the human species, we have wildly different culutres and value systems. So in dealing with an alien race and culture, it would be careless to assume they have anything close to human-like concepts of liberty, self-determination, and so on.

This was actually meant as a tongue-in-cheek entry. I harbour no illusions about the chances of our civilization ever encountering another (which is close to nil). The point of the post was to expose our hypocrisy in regards to our own desire to be uplifted while also holding the conviction that we shouldn't uplift nonhuman animals.