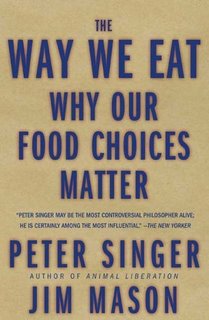 During the past several years I've paid increasing attention to my food choices in an effort to eat more healthily. Guided mostly by the sage advice of Dr. Andrew Weil, I've become very careful about the foods I put into my body. But lately I've been just as concerned with my food choices as they pertain to ethical considerations as I have been with health issues.

For example, while I am a vegetarian, I do like to eat eggs (preferably those that are Omega 3 enriched), but I've always been uncomfortable with my choice knowing that eggs tend to come from factory farms. Recently, in a 'duh, open-hand-smack to the forehead,' moment, I realized that I have the option of buying eggs laid by free-range chickens. Clearly, my ethical eating habits have considerable room for improvement, but I'm getting there, and the options enabling me to eat more ethically are increasing all the time.

When I think about my vegetarianism and my food purchasing habits I focus on three distinct motivators: health, animal ethics, and the environment. Lately, however, the latter two considerations have been giving me great cause for concern, obliging me to re-evaluate my eating habits even further.

Consequently, it was with great interest that I caught Dale Carrico's recent blog entry about a new book written by Peter Singer and Jim Mason. In the book, which is titled, The Way We Eat: Why Our Food Choices Matter, Singer and Mason discuss such things as corporate deception, widespread waste, and desensitization to inhumane practices in the context of ethical food choices. The book's main thrust is that "America's food industry seeks to keep Americans in the dark about the ethical components of their food choices." Needless to say, this is hardly an exclusively American phenomenon.

What the authors are suggesting is that most people are either oblivious, ambivalent, or in complete denial about the negative effects of their eating habits – and the food industry is largely responsible for both creating and perpetuating these feelings of disconnect.

Yet, Singer and Mason are not just decrying the state of the food industry, they are also trying to come up with solutions. As noted in a recent Salon article about the book, some of these solutions are in tune with my own hopes for the future, including the growing of meat from brainless animals. But they also have some more radical ideas, including the neuroengineering of animals to alter their instinctual tendencies.

Like Carrico, I am unsure about this last idea. The suggestion that the psychologies of farm animals be adjusted to reduce their subjective sense of suffering is off putting, mostly because it would do nothing to improve our relationship with animals, nor would it result in more humane farming practices. While I can understand why Singer and Mason would push for such an 'improvement' (it's a real and hard fix, after all), and while I run the risk of posing a slippery slope argument, I think such a strategy could open a Pandora's Box of potential problems that could extend outward to other non-human animals and even humans themselves. Moreover, such a strategy would do nothing to alleviate the negative environmental impacts of factory farming. 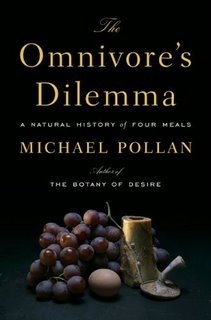 There is one individual, however, who is pushing for long-term sustainable farming and an increase in ethical food options. He is an evangelical Virginia farmer named Joel Salatin who believes that a "revolution against industrial agriculture is just down the road." Similar to the hope that Big Energy will dissipate into smaller, localized and sustainable versions, Salatin envisions the end of mega-farms and supermarkets.

He argues on behalf of localized farming and refuses to ship anything out from his farm. He believes in 'relationship marketing,' and contends that eye-to-eye contact is necessary when a transaction is conducted between a farmer and a consumer. As quoted in Michael Pollan's new book, The Omnivore's Dilemma: A Natural History of Four Meals, he says, "Don’t you find it odd that people will put more work into choosing their mechanic or house contractor than they will into choosing the person who grows their food?" What Salatin believes is happening is the rise of alternative agriculture, with the mainstream splitting into smaller and smaller groups of like-minded people.

Pollan himself believes that there is more to food than just price and convenience; rather, "our relationship to food constitutes our most profound engagement with the natural world," he says. He sees the trip to the supermarket as a crime against the environment and oneself. As a recent Utne article about Pollan noted, when people start to become personally invested in what they eat they enter "a kind of landscape and kind of community."

When I think about these various perspectives and reflect on my own choices I necessarily have to weigh the options. Being an informed consumer and someone who legitimately cares about animals and the environment is something that informs a big part of my decision making. But equally, I have to watch my budget and not inconvenience myself beyond what I deem to be acceptable.

As the omnivorous Dalai Lama himself admits, most of us cannot live perfectly ethical lives, but we should strive to do the best we can and mete out as little harm as possible.

Hmm, time for a snack.