Thinking faster by altering your perception of time 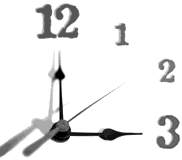 And it would surely come in handy the next time you need to dodge bullets.

Excellent and very thorough research on this topic. Sean Russell wrote a fiction book called "Initiate Brother" which described a monkhood which practiced a meditative technique called Tai Chi Quan. This mental ability enabled them to "slow the sand grains falling through an hourglass" and enable them to perform martial art feats that would play well in Hollywood.

Being a fairly advanced martial artist, I thought this might indeed be cool. I have experienced "fast time" in stressfull situations and thought that being able to control my perception of time would be a huge advantage.

I contacted a hypnotist. I figured that maybe some hypnotic regression combined with post hypnotic suggestion would secure me the ability to find "fast time" at will.

Unfortunately, I am such an individual who cannot be hypnotised at all. (I'm not sure whether to be proud of that fact or disappointed).

In your fact finding, when writing your article, did you see any reference to successfully altering time perception? Increasing speed of perception that is, the usefullness of slowing perception pales in comparision.

Thank you for the kind words. I suggest that you contact David Eagleman himself to get an answer to your question: